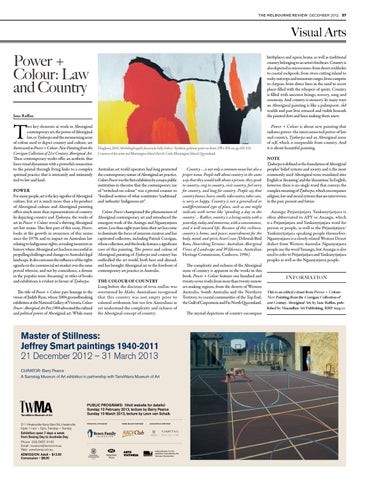 birthplaces and ngura, home, as well as traditional country belonging to an artist’s forebears. Country is also depicted as microcosms: from desert rockholes to coastal rockpools, from rivers cutting inland to rocky outcrops and mountain ranges, from campsite to claypan, from dance lines in the sand to secret places filled with the whispers of spirits. Country is filled with ancestor beings, sorcery, song and ceremony. And country is memory. In many ways an Aboriginal painting is like a palimpsest; old worlds and past lives retraced and visible beneath the painted dots and lines making them anew.

wo key elements at work in Aboriginal contemporary art, the power of Aboriginal law, or Tjukurpa and the mesmerising array of colour used to depict country and culture, are showcased in Power + Colour: New Painting from the Corrigan Collection of 21st Century Aboriginal Art. These contemporary works offer an aesthetic that fuses visual dynamism with a powerful connection to the primal through living links to a complex spiritual practice that is intricately and intimately tied to law and land. Power For many people, art is the key signifier of Aboriginal culture, but art is much more than a by-product of Aboriginal culture and Aboriginal painting offers much more than representations of country. In depicting country and Tjukurpa, the works of art in Power + Colour reveal a thriving Aboriginal art/law nexus. This first part of this essay, Power, looks at the growth in awareness of this nexus since the 1970s and its impact on Australian law relating to Indigenous rights, revealing moments in history where Aboriginal art has been successful in propelling challenges and changes to Australia’s legal landscape. It also canvasses the influence of the rights agenda on the commercial art market over the same period wherein, and not by coincidence, a demise in the popular term ‘dreaming’ in titles of books and exhibitions is evident in favour of Tjukurpa. The title of Power + Colour pays homage to the vision of Judith Ryan, whose 2004 groundbreaking exhibition at the National Gallery of Victoria, Colour Power: Aboriginal Art Post 1984 advocated the cultural and political power of Aboriginal art. While many

Australian art world operators had long promoted the contemporary nature of Aboriginal art practice, Colour Power was the first exhibition by a major public institution to theorise that the contemporary use of “switched-on colour” was a pivotal counter to “fossilised notions of what constitutes ‘traditional’ and ‘authentic’ Indigenous art”. Colour Power championed the phenomenon of Aboriginal contemporary art and introduced the emergent work of the Anangu and Ngaanyatjarra artists. Less than eight years later, their art has come to dominate the focus of museum curators and has captivated collectors, including Patrick Corrigan, whose collection, and this book, features a significant core of this painting. The power and colour of Aboriginal painting of Tjukurpa and country has enthralled the art world, both here and abroad, and has brought Aboriginal art to the forefront of contemporary art practice in Australia. The Colour of Country Long before the doctrine of terra nullius was overturned by Mabo, Australians recognised that this country was not empty prior to colonial settlement, but too few Australians as yet understand the complexity and richness of the Aboriginal concept of country:

Country … is not only a common noun but also a proper noun. People talk about country in the same way that they would talk about a person; they speak to country, sing to country, visit country, feel sorry for country, and long for country. People say that country knows, hears, smells, takes notice, takes care, is sorry or happy. Country is not a generalised or undifferentiated type of place, such as one might indicate with terms like ‘spending a day in the country’ ... Rather, country is a living entity with a yesterday, today and tomorrow, with a consciousness, and a will toward life. Because of this richness, country is home, and peace; nourishment for the body, mind, and spirit; heart’s ease [Deborah Bird Rose, Nourishing Terrains: Australian Aboriginal Views of Landscape and Wilderness, Australian Heritage Commission, Canberra, 1996]. The complexity and richness of the Aboriginal sense of country is apparent in the works in this book. Power + Colour features one hundred and twenty-seven works from more than twenty remote art-making regions, from the deserts of Western Australia, South Australia and the Northern Territory, to coastal communities of the Top End, the Gulf of Carpentaria and Far North Queensland.

Power + Colour is about new painting that radiates power: the interconnected power of law and country, Tjukurpa and an Aboriginal sense of self, which is inseparable from country. And it is about beautiful painting. Note Tjukurpa is defined as the foundation of Aboriginal peoples’ belief systems and society and is the most commonly used Aboriginal term translated into English as ‘dreaming’ and the ‘dreamtime’. In English, however, there is no single word that conveys the complex meaning of Tjukurpa, which encompasses religion, law and moral systems that are interwoven in the past, present and future. Anangu Pitjantjatjara Yankunytjatjara is often abbreviated to APY or Anangu, which is a Pitjantjatjara and Yankunytjatjara word for person or people, as well as the Pitjantjatjara/ Yankunytjatjara speaking people themselves. Ngaanyatjarra is a closely related Western Desert dialect from Western Australia. Ngaanyatjarra people use the word Yanangu, but Anangu is also used to refer to Pitjantjatjara and Yankunytjatjara peoples as well as the Ngaanyatjarra people.

INFORMATION This is an edited extract from Power + Colour: New Painting from the Corrigan Collection of 21st Century Aboriginal Art, by Jane Raffan, published by Macmillan Art Publishing. RRP $125.00

The myriad depictions of country encompass

Indemnification for this exhibition is provided by the Victorian Government 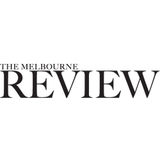 The Melbourne Review is a fresh new presence amongst local media – an absolutely independent source of analysis, opinion and review of leadi...

The Melbourne Review is a fresh new presence amongst local media – an absolutely independent source of analysis, opinion and review of leadi...