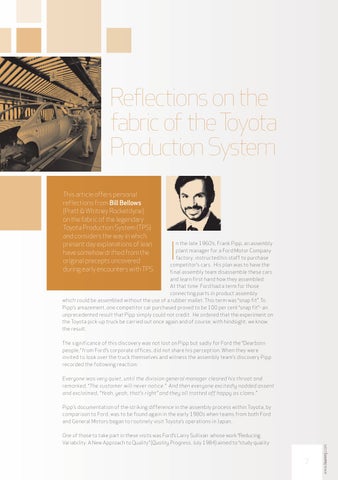 Reflections on the fabric of the Toyota Production System This article offers personal reflections from Bill Bellows (Pratt & Whitney Rocketdyne) on the fabric of the legendary Toyota Production System (TPS) and considers the way in which present day explanations of lean have somehow drifted from the original precepts uncovered during early encounters with TPS.

n the late 1960’s, Frank Pipp, an assembly plant manager for a Ford Motor Company factory, instructed his staff to purchase competitor’s cars. His plan was to have the final assembly team disassemble these cars and learn first hand how they assembled. At that time Ford had a term for those connecting parts in product assembly which could be assembled without the use of a rubber mallet. This term was “snap fit”. To Pipp’s amazement, one competitor car purchased proved to be 100 per cent “snap fit”- an unprecedented result that Pipp simply could not credit. He ordered that the experiment on the Toyota pick-up truck be carried out once again and of course, with hindsight, we know the result. The significance of this discovery was not lost on Pipp but sadly for Ford the “Dearborn people,” from Ford’s corporate offices, did not share his perception. When they were invited to look over the truck themselves and witness the assembly team’s discovery Pipp recorded the following reaction: Everyone was very quiet, until the division general manager cleared his throat and remarked, “The customer will never notice.” And then everyone excitedly nodded assent and exclaimed, “Yeah, yeah, that’s right” and they all trotted off happy as clams.”

One of those to take part in these visits was Ford’s Larry Sullivan whose work “Reducing Variability: A New Approach to Quality” (Quality Progress, July 1984) aimed to “study quality

Pipp’s documentation of the striking difference in the assembly process within Toyota, by comparison to Ford, was to be found again in the early 1980s when teams from both Ford and General Motors began to routinely visit Toyota’s operations in Japan. 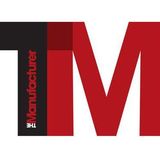