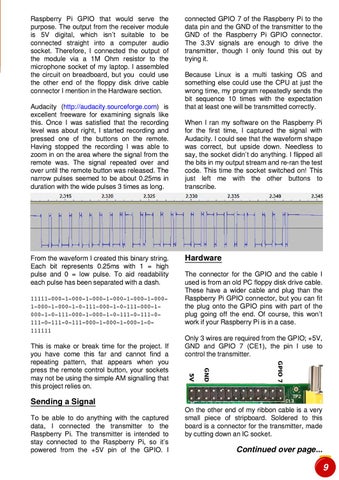 Raspberry Pi GPIO that would serve the purpose. The output from the receiver module is 5V digital, which isn’t suitable to be connected straight into a computer audio socket. Therefore, I connected the output of the module via a 1 M Ohm resistor to the microphone socket of my laptop. I assembled the circuit on breadboard, but you could use the other end of the floppy disk drive cable connector I mention in the Hardware section. Audacity (http://audacity.sourceforge.com) is excellent freeware for examining signals like this. Once I was satisfied that the recording level was about right, I started recording and pressed one of the buttons on the remote. Having stopped the recording I was able to zoom in on the area where the signal from the remote was. The signal repeated over and over until the remote button was released. The narrow pulses seemed to be about 0.25ms in duration with the wide pulses 3 times as long.

This is make or break time for the project. If you have come this far and cannot find a repeating pattern, that appears when you press the remote control button, your sockets may not be using the simple AM signalling that this project relies on.

connected GPIO 7 of the Raspberry Pi to the data pin and the GND of the transmitter to the GND of the Raspberry Pi GPIO connector. The 3.3V signals are enough to drive the transmitter, though I only found this out by trying it. Because Linux is a multi tasking OS and something else could use the CPU at just the wrong time, my program repeatedly sends the bit sequence 1 0 times with the expectation that at least one will be transmitted correctly. When I ran my software on the Raspberry Pi for the first time, I captured the signal with Audacity. I could see that the waveform shape was correct, but upside down. Needless to say, the socket didn’t do anything. I flipped all the bits in my output stream and re-ran the test code. This time the socket switched on! This just left me with the other buttons to transcribe.

Hardware The connector for the GPIO and the cable I used is from an old PC floppy disk drive cable. These have a wider cable and plug than the Raspberry Pi GPIO connector, but you can fit the plug onto the GPIO pins with part of the plug going off the end. Of course, this won’t work if your Raspberry Pi is in a case. Only 3 wires are required from the GPIO; +5V, GND and GPIO 7 (CE1 ), the pin I use to control the transmitter.

On the other end of my ribbon cable is a very small piece of stripboard. Soldered to this board is a connector for the transmitter, made by cutting down an IC socket. 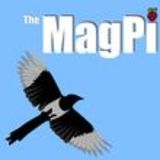