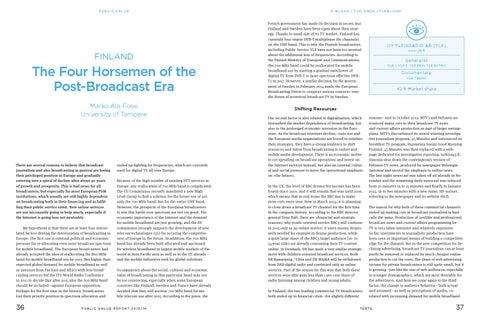 There are several reasons to believe that broadcast journalism and also broadcasting in general are losing their privileged position in Europe and gradually entering into a spiral of decline after about 90 years of growth and prosperity. This is bad news for all broadcasters, but especially for most European PSM institutions, which usually are still highly dependent on broadcasting both in their financing and in fulfilling their public service remit. New online services are not necessarily going to help much, especially if the Internet is going lose net neutrality. My hypothesis is that there are at least four interrelated factors driving the deterioration of broadcasting in Europe. The first one is external political and economic pressure for re-allocating even more broadcast spectrum for mobile broadband. The European broadcasters had already accepted the idea of reallocating the 800 MHz band for mobile broadband use by 2015. But higher than expected global demand for mobile broadband as well as pressure from Far East and Africa with less broadcasting services led the ITU World Radio Conference in 2012 to decide that after 2015 also the 700 MHz band should be included—against European opposition. Perhaps for the first time in the history, broadcasters lost their priority position in spectrum allocation and

ended up fighting for frequencies, which are currently used for digital TV all over Europe. Because of the high number of existing DTT services in Europe, any reallocation of 700 MHz band is complicated. The EU Commission recently mandated a new High Level Group to find a solution for the future use of not only the 700 MHz band, but for the entire UHF band. However, the prospects of the European broadcasters to win this battle over spectrum are not too good. The economic importance of the Internet and the demand for mobile broadband are just growing, and the EU commission strongly supports the development of new telecom technologies (5G) for securing the competiveness of Europe in the future. In addition, the 700 MHz band has already been both allocated and auctioned for wireless broadband in largest mobile markets of the world in Asia Pacific area as well as in the US already— and the mobile industries seek for global solutions. So arguments about the social, cultural and economic value of broadcasting in that particular band may not be too convincing, especially when some European countries like Finland, Sweden and France have already decided that they will auction 700 MHz band for mobile telecom use after 2015. According to the press, the

French government has made its decision in secret, but Finland and Sweden have been open about their strategy. Thanks to small size of its TV market, Finland has currently four empty DVB-T multiplexes (80 channels) on the UHF band. This is why the Finnish broadcasters, including Public Service YLE have not been too worried about the additional loss of frequencies. According to the Finnish Ministry of Transport and Communications, the 700 MHz band could be reallocated for mobile broadband use by starting a gradual switchover of digital TV from DVB-T to more spectrum effective DVBT2 in 2017. However, a similar decision by the government of Sweden in February 2014 made the European Broadcasting Union to »express serious concern« over the future of terrestrial broadcast TV in Sweden.

Shifting Resources The second factor is also related to digitalization, which intensified the market dependence of broadcasting, but also to the prolonged economic recession in the Eurozone. As the broadcast revenues decline, costs rise and the European media organisations are forced to redefine their strategies, they have a strong tendency to shift resources and talent from broadcasting to online and mobile media development. There is an economic motive to cut spending on broadcast operations and invest on the Internet services instead, but also an internal cultural and social pressure to move the operational emphasis on »the future«. In the UK, the level of BBC license fee income has been frozen since 2010, and it will remain that way until 2016, which means that in real terms the BBC has to make more cuts every year. Now in March 2014, it is planning to close down a broadcast TV channel for the first time in the company history. According to the BBC director general Tony Hall, there are »financial and strategic reasons« why youth-oriented service BBC3 will continue in 2015 only as an online service: it saves money desperately needed for example in drama production, while a quite large share of the BBC3 target audience (16- to 24-year-olds) are already consuming their TV content online. In Denmark, DR has made a very similar strategic move with children-oriented broadcast services. Both DR Ramasjang / Ultra and DR MAMA will be withdrawn from DAB digital radio and continued only as online services. Part of the reason for this was that both these services were able gain less than 1 per cent share of radio listening among children and young adults. In Finland, the two leading commercial TV broadcasters both ended up in financial crisis—for slightly different

reasons—and in October 2013, MTV3 and Nelonen announced major cuts in their broadcast TV news and current affairs production as part of larger savings plans. MTV3 discontinued its award-winning investigative journalism program, 45 Minutes and outsourced its breakfast TV program, Huomenta Suomi Good Morning Finland. 45 Minutes was then replaced with a webpage dedicated for investigative reporting, tutkiva45.fi. Sanoma shut down the contemporary version of Nelonen TV news, produced by newspaper Helsingin Sanomat and moved the emphasis to online news. The late night newscast was taken off air already in November and the remaining daily newscast was reduced from 30 minutes in to 15 minutes and finally in January 2014, in to two minutes with a new name, HS-uutiset, referring to the newspaper and its website HS.fi. The reason for why both of these commercial channels ended up making cuts in broadcast journalism is basically the same. Production of credible and professional broadcast news and current affairs programming for TV is very labor-intensive and relatively expensive. So far, investments in journalistic production have been seen as important means of building a competitive edge for the channel. But in the new competition for declining advertising, broadcast TV journalism can at least partly be removed or replaced by much cheaper online production to cut the costs. The share of web advertising income for private broadcasters is still quite small, but it is growing—just like the size of web audiences, especially in younger demographics, which are most desirable for the advertisers. And here we come again to the third factor, the change in audience behavior—both actual and assumed—as well as perceptions of media, corelated with increasing demand for mobile broadband 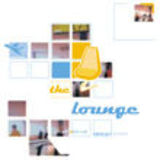