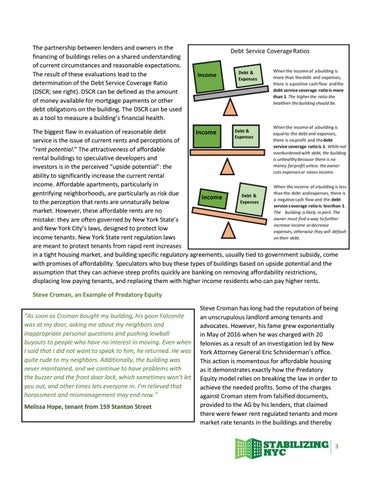 The partnership between lenders and owners in the financing of buildings relies on a shared understanding of current circumstances and reasonable expectations. The result of these evaluations lead to the determination of the Debt Service Coverage Ratio (DSCR; see right). DSCR can be defined as the amount of money available for mortgage payments or other debt obligations on the building. The DSCR can be used as a tool to measure a building’s financial health. The biggest flaw in evaluation of reasonable debt service is the issue of current rents and perceptions of “rent potential.” The attractiveness of affordable rental buildings to speculative developers and investors is in the perceived “upside potential”: the ability to significantly increase the current rental income. Affordable apartments, particularly in gentrifying neighborhoods, are particularly as risk due to the perception that rents are unnaturally below market. However, these affordable rents are no mistake: they are often governed by New York State’s and New York City’s laws, designed to protect low income tenants. New York State rent regulation laws are meant to protect tenants from rapid rent increases in a tight housing market, and building specific regulatory agreements, usually tied to government subsidy, come with promises of affordability. Speculators who buy these types of buildings based on upside potential and the assumption that they can achieve steep profits quickly are banking on removing affordability restrictions, displacing low paying tenants, and replacing them with higher income residents who can pay higher rents. Steve Croman, an Example of Predatory Equity “As soon as Croman bought my building, his goon Falconite was at my door, asking me about my neighbors and inappropriate personal questions and pushing lowball buyouts to people who have no interest in moving. Even when I said that I did not want to speak to him, he returned. He was quite rude to my neighbors. Additionally, the building was never maintained, and we continue to have problems with the buzzer and the front door lock, which sometimes won’t let you out, and other times lets everyone in. I’m relieved that harassment and mismanagement may end now.” Melissa Hope, tenant from 159 Stanton Street

Steve Croman has long had the reputation of being an unscrupulous landlord among tenants and advocates. However, his fame grew exponentially in May of 2016 when he was charged with 20 felonies as a result of an investigation led by New York Attorney General Eric Schniderman’s office. This action is momentous for affordable housing as it demonstrates exactly how the Predatory Equity model relies on breaking the law in order to achieve the needed profits. Some of the charges against Croman stem from falsified documents, provided to the AG by his lenders, that claimed there were fewer rent regulated tenants and more market rate tenants in the buildings and thereby