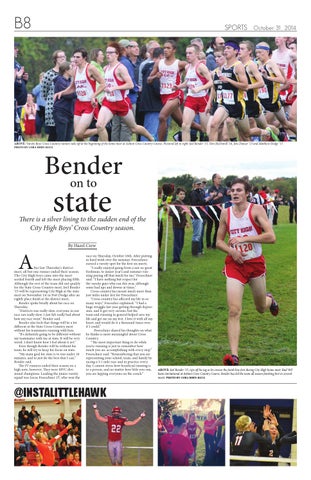 There is a silver lining to the sudden end of the City High Boys’ Cross Country season.

fter last Thursday’s district meet, all but one runner ended their season. The City High boys came into the meet seeded fourth and left the meet placing fifth. Although the rest of the team did not qualify for the State Cross Country meet, Joel Bender ‘15 will be representing City High at the state meet on November 1st in Fort Dodge after an eighth place finish at the district meet. Bender spoke briefly about his race on Thursday. “Districts was really slow, everyone in our race ran really slow. I just felt really bad about how my race went,” Bender said. Bender also feels that things will be a lot different at the State Cross Country meet without his teammates running with him. “It’s definitely going to be different without my teammates with me at state. It will be very weird. I don’t know how I feel about it yet.” Even though Bender will be without his team, he will try to keep his focus on state. “My main goal for state is to run under 16 minutes, and to just do the best that I can,” Bender said. The JV runners ended their season on a high note, however. They were MVC divisional champions. Leading the junior varsity squad was Lucas Froeschner 15’, who won the

race on Thursday, October 16th. After putting in hard work over the summer, Froeschner earned a varsity spot for the first six meets. “I really enjoyed going from a not-so-great freshman, to junior year’s and summer running paying off that much for me,” Froeschner said. “I have nothing but respect for the varsity guys who ran this year, although some had ups and downs at times.” Cross country has meant much more than just miles under feet for Froeschner. “Cross country has affected my life in so many ways,” Froescher explained. “I had a huge struggle last year getting through depression, and it got very serious, but the team and running in general helped save my life and get me on my feet. I love it with all my heart, and would do it a thousand times over if I could.” Froeschner shared his thoughts on what he thinks is most meaningful about Cross Country. “The most important thing to do while you’re running is just to remember how much you are accomplishing with every step,” Froeschner said. “Remembering that you are representing your school, team, and family by racing a 3.1 mile race and in practice every day. I cannot stress how beneficial running is to a person, and no matter how little you run, you are lapping everyone on the couch.”

ABOVE: Joel Bender ‘15, rips off his tag as he crosses the finish line first during City High home meet: Bud Williams Invitational at Ashton Cross Country Course. Bender has led the team all season finishing first in several meets. PHOTO BY CORA BERN-KLUG 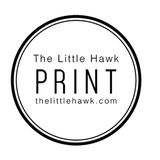 More from The Little Hawk