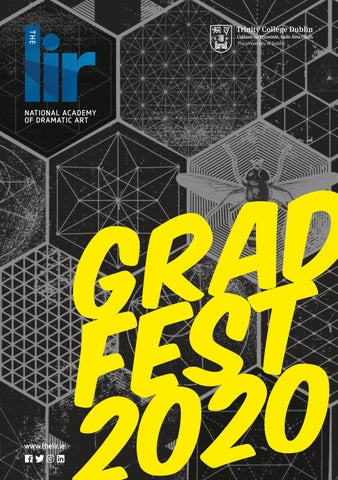 GRADFEST 2020 is a collaboration of productions directed and designed by this yearâ&amp;#x20AC;&amp;#x2122;s MFA students. The four plays being produced are a culmination of an intensive year of hands-on training in theatre directing, stage design, lighting design, costume design and set design. The cast of each production consists of final year acting students and the stage management and technical theatre roles are undertaken by final and second year Stage Management and Technical Theatre students.

IMAGE OF AN UNKNOWN YOUNG WOMAN by Elinor Cook

“Yes, but she’s visible. She matters.” A young woman in a yellow dress has been shot by the police. It was caught on camera. As the video of this violent act goes viral, the yellow dress becomes a symbol that sparks and fuels a revolution. Elinor Cook’s play, Image of an Unknown Young Woman, blends the personal with the political and poses the question: how can a symbol help, hinder, and hurt in times of great change? Elinor Cook was the winner of the George Devine Award for Most Promising Playwright in 2013 and a finalist for the Susan Smith Blackburn Award in 2018. Image of an Unknown Young Woman premiered at the Gate Theatre, London, in 2015. This is an amateur production performed by arrangement with Nick Hern books.

“ In the quantum multiverse, every choice, every decision you’ve ever and never made exists in an unimaginably vast ensemble of parallel universes.” A beekeeper and cosmologist meet at a barbecue. Their story then plays out through an endless multitude of possibilities. Pushed and pulled along by the competing forces of destiny and chance, Marianne and Roland navigate through some of life’s most mundane and most significant experiences. Their relationship progresses, or it doesn’t. Love prevails, or it doesn’t. Life goes on, or it doesn’t. Time dances on as the two orbit in and out of one another’s universes, making impressions that will last a lifetime. This show contains strong language and mature themes. This amateur production of “Constellations” is presented by arrangement with Concord Theatricals Ltd. on behalf of Samuel French Ltd. www.concordtheatricals.co.uk

SALOMÉ, OR THE CULT OF THE CLITORIS: A HISTORICAL PHALLUSY by Mitchell Polonsky Adapted from Oscar Wilde’s Salomé and the verbatim trial reports of Noel Pemberton Billing “By woman came evil into the world.” Salomé, or The Cult of the Clitoris: A Historical Phallusy is a verbatim staging of the infamous libel trial that ensued following the Independent Theatre’s censored 1918 production of Oscar Wilde’s Salomé. Accused by a Member of Parliament of conspiring with a cult of lesbian secret agents to undermine the British war-effort, global superstar Maud Allan must reclaim her dignity and defend her name. In this irreverent meditation on the aesthetics and politics of spectatorship, the female body becomes a battlefield as sexual politics turn state politics. Scurrilous passions are revealed and the thin line between the courtroom and the theatre, between fact and fiction, collapse. The climactic conclusion of Wilde’s scandalous tragedy is performed live in the courtroom. At the end of the trial, what will remain sexually deviant and what – or who – will be acceptable to desire?

Tamsin packs boxes in a warehouse, on a zero-hour contract. Her brother, Dean is housebound. But when he is declared fit for work, things change as Tamsin needs to pack faster and hit more targets to support both her and her brother. Wish List is an analysis of the government’s social security machine. A machine that boxes you off with no regard for your individuality. In the times of COVID-19, Wish List poses ever-so-relevant questions: how do we value the weaker members of society or evaluate their worth? Is the system broken if the system works perfectly for the majority? This show contains strong language and scenes of violence. This is an amateur production performed by arrangement with Nick Hern books.

Caroline O’Connor is studying for an MFA Stage Design at The Lir Academy where she is majoring in Costume Design. Caroline studied Fashion Design at the Limerick College of Art and Design, followed by a degree in History of Art at UCD. She has worked as a designer for various companies and currently teaches Fashion and Theatre studies at a College of FE where she has been involved in the design of theatre for college productions at Theatre@36 and LexIcon Theatre Dun Laoghaire.

Israel Del Barco has been working as a lighting designer and programmer since 2011. He has participated in more than 50 productions in Brazil including theatre, concerts, musical theatre, dance and festivals, where he worked as a lighting designer/technician/operator and programmer and set and video designer. In 2017 he moved to Ireland to start his first year in the MFA in Stage Design (parttime). In 2019, he worked for six months as a lighting technician and operator with electronic music festivals in the Netherlands, Germany and Belgium. Gerard McCabe

Louise Dunne graduated with a First Class Honours BED from NCAD in 2002 and has worked as an Art Educator/ Portfolio facilitator. She is also a freelance Graphic Designer. Within the theatre industry Louise has worked as a set designer and construction, costume designer and maker and prop creator, producing 8 full length productions from design to realization. Theatrical pursuits also include acting, directing and producing but her heart lies in bringing to life the imagined world of the writer and realising the Director’s vision. This world dreamed up, becomes tangible. Roberto Ventruti is a Stage Designer for Drama, Musicals and Opera. After graduating in engineering and joining courses at RADA and UAL in London he built up his career as lighting and set designer for short films, drama and opera. Since then he has designed lights for musicals, festivals (UCL Festival of Culture, Voilà) and set for the recent Mozart’s Operas in the UK and France.

Elizabeth Kate Lovelady, currently based in Dublin, worked professionally as a director, playwright and arts administrator in Chicago for 12 years. She received a BFA in Playwriting and Directing from Southern Methodist University in Dallas, Texas, where she was awarded the Garland Wright Directing Award and the Rosenfield Playwriting Award. Her select credits include the world premiere of D.O.A, which she adapted from the noir film by the same name, Photograph 51 by Anna Ziegler and Fanny’s First Play by George Bernard Shaw. She also wrote and performed the one woman show A Simple Lesson in Baking with Marie Antoinette [The Island; Pivot Arts Festival] Gerard McCabe has been a professional actor for 22 years. He was artistic director and founder in the regularly funded theatre company Pintsized Productions for ten years (2008-2018) and now runs Sodabread Theatre company. He started directing at the age of eighteen when he was the youngest ever director at the Belfast Fringe Festival directing John Godber’s Teechers.He has previously directed Girls and Dolls by Lisa McGee (Gaiety Theatre), Legally Blonde (Grand Opera House/Ulster Operatic), The Girl’s Guide to Saving the World by Elinor Cook (CQAF 2019). Katie Halloran is a theatre director, arts educator, performer, and writer from Minneapolis, Minnesota. In May 2017, she graduated with a BFA in Musical Theatre Performance with concentrations in acting, directing, and songwriting from The Boston Conservatory. Katie is the founder and artistic director of Pale Blue Dot Theatre Company, a zero-waste, ecofeminist company dedicated to crafting and promoting theatrical works that produce little to no waste while sharing narratives that engage, educate, and encourage audiences to take action towards creating positive environmental change. Pale Blue Dot directing credits include: Mother by Chantal Bilodeau, Wave by Ida Esmaeili, Finale by Kendra Fanconi, Triflesby Susan Glaspell, and Lungs by Duncan Macmillan. Mitchell Polonsky is a theatre and opera director from Cincinnati, Ohio. A graduate of Harvard University with a dual degree in Theater, Dance and Media and English Literature, Mitchell is the co-founder and co-artistic director of THE GOAT EXCHANGE, an experimental ensemble founded in 2016 with an emphasis on site-responsive community interventions and irreverent reappropriations of classic dramatic texts.Productions with THE GOAT EXCHANGE include Pinter’s The Room, Buchner’s Woyzeck, Brecht’s The Life of Galileo, Tennessee Williams’ A Streetcar Named Desire.Mitchell is a recipient of the US-Ireland Alliance’s George J. Mitchell Fellowship.

*Welcome back to all the Lir graduates working on these shows.

We would like to express our gratitude to Jim and Janet Curley, who are The Lir Academy’s Patrons of Playwriting and the supporters of the Patricia Leggett Playwriting Scholarship.

Thank you to all the staff and teachers who have supported the students during these challenging times and thank you to PSI for their technical support.

BOOKING TICKETS Tickets can be booked via the events section on The Lir’s website (www.thelir.ie).

REFUNDS Tickets are non-refundable except in the event of a show being cancelled.

Foundation Diploma in Acting and Theatre