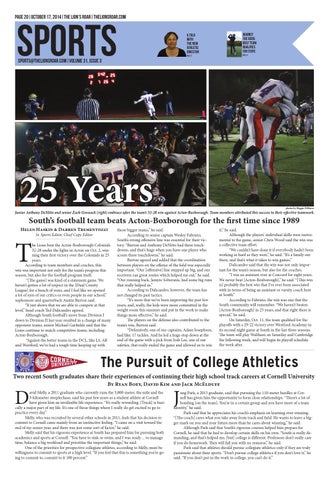 A talk with the New athletic director

AGAINST THE ODDS: golf TEAM QUALIFIES FOR STATE

he Lions beat the Acton-Boxborough Colonials 32-28 under the lights in Acton on Oct. 2, winning their first victory over the Colonials in 25 years. According to team members and coaches, this win was important not only for the team’s progress this season, but also for the football program itself. “[The game] was kind of a statement game. We haven’t gotten a lot of respect in the [Dual County League] for a bunch of years, and I feel like we opened a lot of eyes of our critics or even people in our school,” sophomore and quarterback Austin Burton said. “It just shows that we are able to compete at that level,” head coach Ted Dalicandro agreed. Although South football’s move from Division I down to Division II last year resulted in a change of many opponent teams, senior Michael Garfinkle said that the Lions continue to match competitive teams, including Acton-Boxborough. “Against the better teams in the DCL, like LS, AB and Westford, we’ve had a tough time keeping up with

those bigger teams,” he said. According to senior captain Wesley Fabrizio, South’s strong offensive line was essential for their victory. “Burton and Anthony DeNitto had three touchdowns, and that’s huge when you have one player who scores three touchdowns,” he said. Burton agreed and added that the coordination between players on the offense of the field was especially important. “Our [offensive] line stepped up big, and our receivers ran great routes which helped me out,” he said. “Our running back, Jamyre Soberanis, had some big runs that really helped us.” According to Dalicandro, however, the team has not changed its past tactics. “It’s more that we’ve been improving the past few years, and, really, the kids were more committed in the weight room this summer and put in the work to make things more effective,” he said. The players on the defense also contributed to the team’s win, Burton said. “Defensively, one of our captains, Adam Josephson, had like, 17 tackles. And he led a huge stop down at the end of the game with a pick from Josh Lee, one of our safeties, that really ended the game and allowed us to win

it,” he said. Although the players’ individual skills were instrumental to the game, senior Chris Wood said the win was a collective team effort. “We couldn’t have done it if everybody hadn’t been working as hard as they were,” he said. “It’s a family out there, and that’s what it takes to win games.” Dalicandro said that the win was not only important for the team’s season, but also for the coaches. “I was an assistant over at Concord for eight years. We never beat [Acton-Boxborough],” he said. “[This win is] probably the best win that I’ve ever been associated with in terms of being an assistant or varsity coach here at South.” According to Fabrizio, the win was one that the South community will remember. “We haven’t beaten [Acton-Boxborough] in 25 years, and that right there is special,” he said. On Saturday, Oct. 11, the team qualified for the playoffs with a 29-22 victory over Westford Academy in its second night game at South in the last three seasons. The team will play Waltham on Saturday and Cambridge the following week, and will begin its playoff schedule the week after.

avid Melly, a 2011 graduate who currently runs the 3,000-meter, the mile and the 3-kilometer steeplechase, said his past few years as a student athlete at Cornell have given him an invaluable life experience. “It’s really rewarding. [Track] is basically a major part of my life. It’s one of those things where I really do get excited to go to practice every day.” Melly, who was recruited by several other schools in 2011, feels that his decision to commit to Cornell came mainly from an instinctive feeling. “I came on a visit toward the end of my senior year, and there was just some sort of factor,” he said. Melly said that his rigorous experience at South has prepared him for pursuing both academics and sports at Cornell. “You have to sink or swim, and I was ready ... to manage time, balance a big workload and prioritize the important things,” he said. One of the priorities for prospective collegiate athletes, according to Melly, must be willingness to commit to sports at a high level. “If you feel that this is something you’re going to commit to, commit to it 100 percent.”

ung Park, a 2013 graduate, said that pursuing the 110-meter hurdles at Cornell has given him the opportunity to form close relationships. “There’s a lot of bonding [on the team]. You’re in a certain group and you have more of a team identity,” he said. Park said that he appreciates his coach’s emphasis on learning over winning. “[The coach] cares what you take away from track and field. He wants to leave a bigger mark on you and your future more than he cares about winning,” he said. Although Park said that South’s rigorous courses helped him prepare for Cornell, he said that he had to develop certain skills on his own. “South is really demanding, and that’s helped me, [but] college is different. Professors don’t really care if you do homework. They will fail you with no remorse,” he said. Park said that athletes should pursue collegiate athletics only if they are truly passionate about their sports. “Don’t pursue college athletics if you don’t love it,” he said. “If you don’t put in the work in college, you can’t do it.” 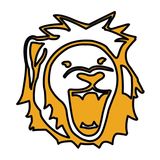