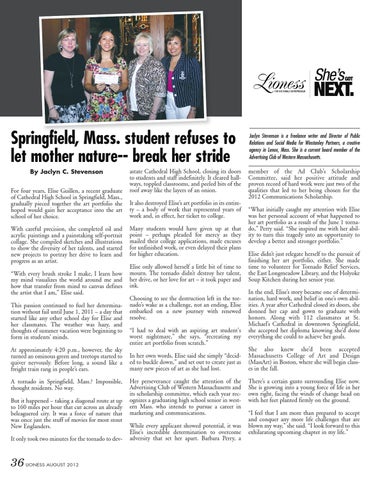 Springfield, Mass. student refuses to let mother nature-- break her stride By Jaclyn C. Stevenson For four years, Elise Guillen, a recent graduate of Cathedral High School in Springfield, Mass., gradually pieced together the art portfolio she hoped would gain her acceptance into the art school of her choice. With careful precision, she completed oil and acrylic paintings and a painstaking self-portrait collage. She compiled sketches and illustrations to show the diversity of her talents, and started new projects to portray her drive to learn and progress as an artist. “With every brush stroke I make, I learn how my mind visualizes the world around me and how that transfer from mind to canvas defines the artist that I am,” Elise said. This passion continued to fuel her determination without fail until June 1, 2011 – a day that started like any other school day for Elise and her classmates. The weather was hazy, and thoughts of summer vacation were beginning to form in students’ minds. At approximately 4:20 p.m., however, the sky turned an ominous green and treetops started to quiver nervously. Before long, a sound like a freight train rang in people’s ears. A tornado in Springfield, Mass.? Impossible, thought residents. No way. But it happened – taking a diagonal route at up to 160 miles per hour that cut across an already beleaguered city. It was a force of nature that was once just the stuff of movies for most stout New Englanders. It only took two minutes for the tornado to dev-

astate Cathedral High School, closing its doors to students and staff indefinitely. It cleared hallways, toppled classrooms, and peeled bits of the roof away like the layers of an onion. It also destroyed Elise’s art portfolio in its entirety – a body of work that represented years of work and, in effect, her ticket to college. Many students would have given up at that point – perhaps pleaded for mercy as they mailed their college applications, made excuses for unfinished work, or even delayed their plans for higher education. Elise only allowed herself a little bit of time to mourn. The tornado didn’t destroy her talent, her drive, or her love for art – it took paper and ink. Choosing to see the destruction left in the tornado’s wake as a challenge, not an ending, Elise embarked on a new journey with renewed resolve. “I had to deal with an aspiring art student&#39;s worst nightmare,” she says, “recreating my entire art portfolio from scratch.” In her own words, Elise said she simply “decided to buckle down,” and set out to create just as many new pieces of art as she had lost. Her perseverance caught the attention of the Advertising Club of Western Massachusetts and its scholarship committee, which each year recognizes a graduating high school senior in western Mass. who intends to pursue a career in marketing and communications. While every applicant showed potential, it was Elise’s incredible determination to overcome adversity that set her apart. Barbara Perry, a

Jaclyn Stevenson is a freelance writer and Director of Public Relations and Social Media for Winstanley Partners, a creative agency in Lenox, Mass. She is a current board member of the Advertising Club of Western Massachusetts.

member of the Ad Club’s Scholarship Committee, said her positive attitude and proven record of hard work were just two of the qualities that led to her being chosen for the 2012 Communications Scholarship. “What initially caught my attention with Elise was her personal account of what happened to her art portfolio as a result of the June 1 tornado,” Perry said. “She inspired me with her ability to turn this tragedy into an opportunity to develop a better and stronger portfolio.” Elise didn’t just relegate herself to the pursuit of finishing her art portfolio, either. She made time to volunteer for Tornado Relief Services, the East Longmeadow Library, and the Holyoke Soup Kitchen during her senior year. In the end, Elise’s story became one of determination, hard work, and belief in one’s own abilities. A year after Cathedral closed its doors, she donned her cap and gown to graduate with honors. Along with 112 classmates at St. Michael’s Cathedral in downtown Springfield, she accepted her diploma knowing she’d done everything she could to achieve her goals. She also knew she’d been accepted Massachusetts College of Art and Design (MassArt) in Boston, where she will begin classes in the fall. There’s a certain gusto surrounding Elise now. She is growing into a young force of life in her own right, facing the winds of change head on with her feet planted firmly on the ground. “I feel that I am more than prepared to accept and conquer any more life challenges that are blown my way,” she said. “I look forward to this exhilarating upcoming chapter in my life.”

For the Female Entrepreneur 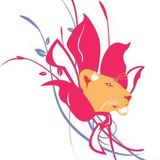