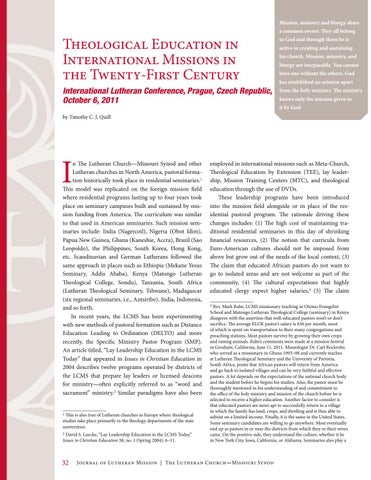 a common owner. They all belong to God and through them he is active in creating and sustaining his church. Mission, ministry, and liturgy are inseparable. You cannot have one without the others. God has established no mission apart from the holy ministry. The ministry knows only the mission given to it by God.

This is also true of Lutheran churches in Europe where theological studies take place primarily in the theology departments of the state universities. 2

employed in international missions such as Meta-Church, Theological Education by Extension (TEE), lay leadership, Mission Training Centers (MTC), and theological education through the use of DVDs. These leadership programs have been introduced into the mission field alongside or in place of the residential pastoral program. The rationale driving these changes includes: (1) The high cost of maintaining traditional residential seminaries in this day of shrinking financial resources, (2) The notion that curricula from Euro-American cultures should not be imposed from above but grow out of the needs of the local context, (3) The claim that educated African pastors do not want to go to isolated areas and are not welcome as part of the community, (4) The cultural expectations that highly educated clergy expect higher salaries,3 (5) The claim 3

Rev. Mark Rabe, LCMS missionary teaching in Otemo Evangelist School and Matongo Lutheran Theological College (seminary) in Kenya disagrees with the assertion that well-educated pastors won’t or don’t sacrifice. The average ELCK pastor’s salary is $36 per month, most of which is spent on transportation to their many congregations and preaching stations. Most pastors survive by growing their own crops and raising animals. Rabe’s comments were made at a mission festival in Gresham, California, June 11, 2011. Missiologist Dr. Carl Rockrohr, who served as a missionary in Ghana 1993–98 and currently teaches at Lutheran Theological Seminary and the University of Pretoria, South Africa, posits that African pastors will return from America and go back to isolated villages and can be very faithful and effective pastors. A lot depends on the expectations of the national church body and the student before he begins his studies. Also, the pastor must be thoroughly mentored in his understanding of and commitment to the office of the holy ministry and mission of the church before he is selected to receive a higher education. Another factor to consider is that educated pastors are more apt to successfully return to a village in which the family has land, crops, and dwelling and is thus able to subsist on a limited income. Finally, it is the same in the United States. Some seminary candidates are willing to go anywhere. Most eventually end up as pastors in or near the districts from which they or their wives came. On the positive side, they understand the culture, whether it be in New York City, Iowa, California, or Alabama. Seminaries also play a 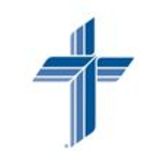