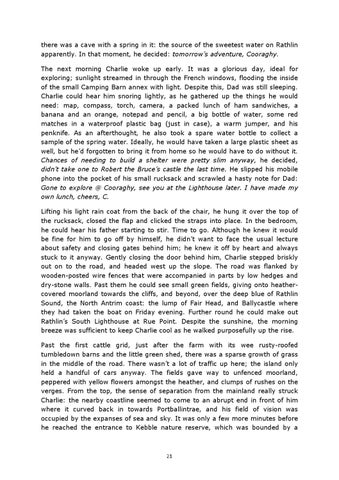 there was a cave with a spring in it: the source of the sweetest water on Rathlin apparently. In that moment, he decided: tomorrow’s adventure, Cooraghy. The next morning Charlie woke up early. It was a glorious day, ideal for exploring; sunlight streamed in through the French windows, flooding the inside of the small Camping Barn annex with light. Despite this, Dad was still sleeping. Charlie could hear him snoring lightly, as he gathered up the things he would need: map, compass, torch, camera, a packed lunch of ham sandwiches, a banana and an orange, notepad and pencil, a big bottle of water, some red matches in a waterproof plastic bag (just in case), a warm jumper, and his penknife. As an afterthought, he also took a spare water bottle to collect a sample of the spring water. Ideally, he would have taken a large plastic sheet as well, but he’d forgotten to bring it from home so he would have to do without it. Chances of needing to build a shelter were pretty slim anyway, he decided, didn’t take one to Robert the Bruce’s castle the last time. He slipped his mobile phone into the pocket of his small rucksack and scrawled a hasty note for Dad: Gone to explore @ Cooraghy, see you at the Lighthouse later. I have made my own lunch, cheers, C. Lifting his light rain coat from the back of the chair, he hung it over the top of the rucksack, closed the flap and clicked the straps into place. In the bedroom, he could hear his father starting to stir. Time to go. Although he knew it would be fine for him to go off by himself, he didn’t want to face the usual lecture about safety and closing gates behind him; he knew it off by heart and always stuck to it anyway. Gently closing the door behind him, Charlie stepped briskly out on to the road, and headed west up the slope. The road was flanked by wooden-posted wire fences that were accompanied in parts by low hedges and dry-stone walls. Past them he could see small green fields, giving onto heathercovered moorland towards the cliffs, and beyond, over the deep blue of Rathlin Sound, the North Antrim coast: the lump of Fair Head, and Ballycastle where they had taken the boat on Friday evening. Further round he could make out Rathlin’s South Lighthouse at Rue Point. Despite the sunshine, the morning breeze was sufficient to keep Charlie cool as he walked purposefully up the rise. Past the first cattle grid, just after the farm with its wee rusty-roofed tumbledown barns and the little green shed, there was a sparse growth of grass in the middle of the road. There wasn’t a lot of traffic up here; the island only held a handful of cars anyway. The fields gave way to unfenced moorland, peppered with yellow flowers amongst the heather, and clumps of rushes on the verges. From the top, the sense of separation from the mainland really struck Charlie: the nearby coastline seemed to come to an abrupt end in front of him where it curved back in towards Portballintrae, and his field of vision was occupied by the expanses of sea and sky. It was only a few more minutes before he reached the entrance to Kebble nature reserve, which was bounded by a 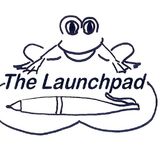