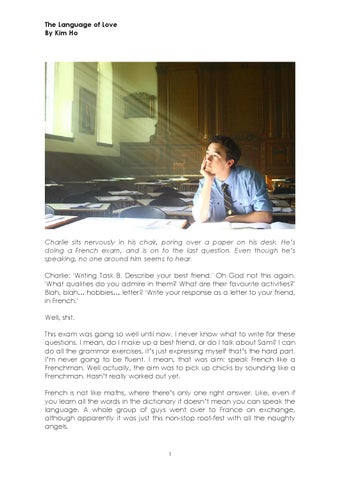 The Language of Love By Kim Ho

Charlie sits nervously in his chair, poring over a paper on his desk. He’s doing a French exam, and is on to the last question. Even though he’s speaking, no one around him seems to hear. Charlie: 'Writing Task B. Describe your best friend.' Oh God not this again. 'What qualities do you admire in them? What are their favourite activities?' Blah, blah… hobbies… letter? 'Write your response as a letter to your friend, in French.' Well, shit. This exam was going so well until now. I never know what to write for these questions. I mean, do I make up a best friend, or do I talk about Sam? I can do all the grammar exercises, it’s just expressing myself that’s the hard part. I’m never going to be fluent. I mean, that was aim: speak French like a Frenchman. Well actually, the aim was to pick up chicks by sounding like a Frenchman. Hasn’t really worked out yet. French is not like maths, where there’s only one right answer. Like, even if you learn all the words in the dictionary it doesn’t mean you can speak the language. A whole group of guys went over to France on exchange, although apparently it was just this non-stop root-fest with all the naughty angels.

The Language of Love By Kim Ho Is that it? Pillow talking your way to fluency? And there are all these traps in the language. Like the word ‘baiser’ means ‘to kiss’ and ‘to fuck,’ and the only difference is context. I mean, who would do that? I can imagine some sad French dude thinking that up just to make it hard for… for people like me. Sam and I do everything together. Eat. Piss. Muck about in French. We steal all the whiteboard markers when our teacher’s late to class. We would sit together too, but Monsieur Edgerton likes the seating alphabetical, so Sam’s been put right in front of me. It does get a bit annoying, his head blocking my view all the time. ‘Specially on Friday afternoons when we get to watch a film – apparently all French movies are called films. Sometimes I tap him on the shoulder and when he turns round I flick a rubber band at him. Although I haven’t really been doing that recently. His parents are going through a divorce and he comes to school all like morose, you know? Like, he smiles and all that, but you can see in his eyes that he’s hurting pretty bad inside. In class, he’s stopped turning round. He just sits, hunched over. Fidgets with his pencil case. It’s been a shit year for him. Wanted to get into like the firsts Basketball, but they moved him down instead cos he’s become sort of ‘distant’. When I asked him about it he just jabbed me in the arm with his locker key. I don’t have such grand aspirations. I um… I wanted to be head librarian. I got it, cos I can wrap books better than the teachers can. That, and I don’t steal the sex ed. books. The Karma Sutra, a Graphic Guide. Avoiding Gonorrhea for Dummies. Gonorrhea. Sounds like a name from Shakespeare, doesn’t it? Cordelia, Regan, Gonorrhea. I got a badge, too. For Library. It’s gold, and shiny I’m in love with Sam. I’m in love with my best friend. Dunno how it happened... just somewhere along the line of listening to his secrets and seeing how hurt he was I realised how much I care. I want to hold him, tell him it’s all gonna be ok. The fuck is happening to me? Like, my heart beats faster when he’s around, and I can’t think about

The Language of Love By Kim Ho anybody else. I don’t need that, ‘specially not in a French exam. But I can’t help it. I can’t control it. I try and do my homework but my mind keeps wandering, and I’m sitting in French over and over again. Mr. Edgerton’s playing a film, but I’m watching Sam. I see the outline of his face silhouetted against the projector screen, and I want to see his eyes, touch his cheek, press my lips to his… and it scares me shitless. I Googled, ‘How to tell a guy you like him,’ but all the results were about how much makeup to use. I wouldn’t dare say a word to him. I mean, how would I even start? 'Hi Sam, hope your parents haven’t murdered each other yet. I’m gay. Are you gay? Do you want to cuddle, or something?' I’m afraid. Afraid that I’ll ask him to kiss me… and he’ll get the wrong idea. Think I’m a creep, y’know? It’s not cos he’s a boy, he just happens to be one. And I can’t figure out whether that makes it wrong or special. I know what my mates’d say. One time, we went down to the beach, just laughing and mucking about. But, y’know, ‘Tanning is skin cells in trauma,’ so I offered to put sunscreen on Sam’s back. He just smiled, said it was fine, but the other guys howled me down. Didn’t let me forget how gay I’d acted. ‘Charlie’s a poofter!’ But I don’t want to forget. I don’t want to forget Sam running back from the surf, shaking the water out of his hair. Big grin on his face. I want what’s best for him; I really do. But I also want him for myself. I want to be what’s best for him. Am I just being selfish? He’s my best friend, and he means more to me than any Band 6 exam mark. Maybe the best thing to do is just keep this inside and squash it. But I don’t want to betray him. He trusts me. He opens up to me. Shouldn’t I do the same? ‘Charlie’s a poofter.’ You always hear people saying it’s ‘weird’ and ‘just not normal’. But isn’t that the point of love? To transcend normalness and become something special? Maybe the French would even back me. I mean, amour is a masculine noun. I have to take the plunge. Open my mouth and tell that beautiful boy how I feel. A letter. 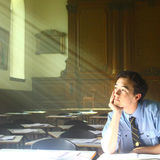 The Language of Love by Kim Ho

In the middle of a French exam, 17 year old Charlie struggles to find the words to be true to his best friend...and himself. A wry, delicat...

The Language of Love by Kim Ho

In the middle of a French exam, 17 year old Charlie struggles to find the words to be true to his best friend...and himself. A wry, delicat...