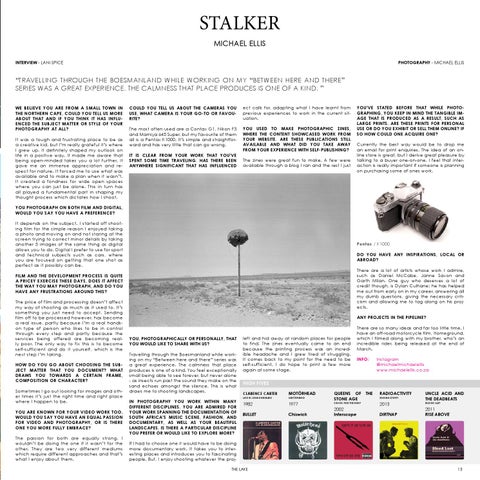 “Travelling through the Boesmanland while working on my “Between here and there” series was a great experience. The calmness that place produces is one of a kind. ” We believe you are from a small town in the Northern Cape, could you tell us more about that and if you think it has influenced the subject matter or style of your photography at all? It was a tough and frustrating place to be as a creative kid, but I’m really grateful it’s where I grew up. It definitely shaped my outlook on life in a positive way. It made me aware that being open-minded takes you a lot further. It gave me an immense appreciation and respect for nature. It forced me to use what was available and to make a plan when it wasn’t. It created a fondness for wide open spaces where you can just be alone. This in turn has all played a fundamental part in shaping my thought process which dictates how I shoot.

Could you tell us about the cameras you use, what camera is your go-to or favourite?

ect calls for, adapting what I have learnt from previous experiences to work in the current situation.

The most often used are a Contax G1, Nikon F3 and Mamiya 645 Super, but my favourite of them all is a Pentax K1000. It’s simple and straightforward and has very little that can go wrong.

You used to make photographic zines, where the content showcased work from your website. Are these publications still available and what did you take away from your experience with self-publishing?

It is clear from your work that you’ve spent some time traveling. Has there been anywhere significant that has influenced

The zines were great fun to make. A few were available through a blog I ran and the rest I just

You’ve stated before that while photographing, you keep in mind the tangible image that is produced as a result, such as large prints. Are these prints for personal use or do you exhibit or sell them online? If so how could one acquire one? Currently the best way would be to drop me an email for print enquiries. The idea of an online store is great, but I derive great pleasure by talking to a buyer one-on-one. I feel that interaction is really important if someone is planning on purchasing some of ones work.

You photograph on both film and digital, would you say you have a preference? It depends on the subject. I started off shooting film for the simple reason I enjoyed taking a photo and moving on and not staring at the screen trying to correct minor details by taking another 5 images of the same thing as digital allows you to do. Digital I prefer to use for sport and technical subjects such as cars, where you are focused on getting that one shot as perfect as it possibly can be.

Pentax / K1000 Do you have any inspirations, local or abroad? There are a lot of artists whose work I admire, such as Daniel McCabe, Janne Savon and Garth Milan. One guy who deserves a lot of credit though, is Dylan Culhane; he has helped me out from early on in my career, answering all my dumb questions, giving the necessary criticism and allowing me to tag along on his projects.

Film and the development process is quite a pricey exercise these days, does it affect the way you may photograph, and do you have any frustrations around this? The price of film and processing doesn’t affect my way of shooting as much as it used to. It’s something you just need to accept. Sending film off to be processed however, has become a real issue, partly because I’m a real handson type of person who likes to be in control through every step and partly because the services being offered are becoming really poor. The only way to fix this is to become self-sufficient and do it yourself, which is the next step I’m taking. How do you go about choosing the subject matter that you document? What draws you towards a certain frame, composition or character? Sometimes I go out looking for images and other times it’s just the right time and right place where I happen to be. You are known for your video work too. Would you say you have an equal passion for video and photography, or is there one you more fully embrace? The passion for both are equally strong. I wouldn’t be doing the one if it wasn’t for the other. They are two very different mediums which require different approaches and that’s what I enjoy about them.

Any projects in the pipeline?

you, photographically or personally, that you would like to share with us? Travelling through the Boesmanland while working on my “Between here and there” series was a great experience. The calmness that place produces is one of a kind. You feel exceptionally small being able to see forever, but never alone - as insects run past the sound they make on the sand echoes amongst the silence. This is what draws me to shooting landscapes. In photography you work within many different disciplines. You are admired for your work spanning the documentation of South Africa’s music scene, fashion, and documentary, as well as your beautiful landscapes. Is there a particular discipline you prefer or would like to explore more?

left and hid away at random places for people to find. The zines eventually came to an end because the printing process was an incredible headache and I grew tired of struggling. It comes back to my point for the need to be self-sufficient. I do hope to print a few more again at some stage.

There are so many ideas and far too little time. I have an off-road motorcycle film, Homeground, which I filmed along with my brother, who’s an incredible rider, being released at the end of March. INFO: Instagram @michaelmichaelellis www.michaelellis.co.za

Queens of Stone Age Songs for the Deaf

If I had to choose one it would have to be doing more documentary work. It takes you to interesting places and introduces you to fascinating people. But, I enjoy shooting whatever the projTHE LAKE 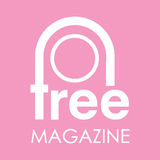