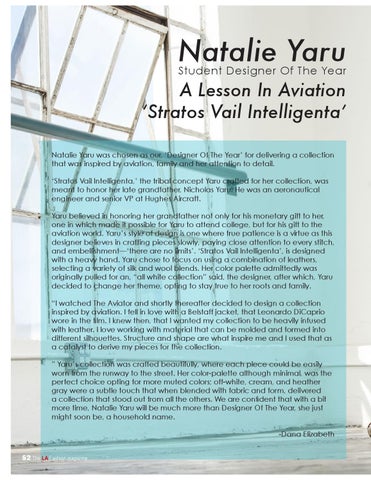 Student Designer Of The Year

A Lesson In Aviation ‘Stratos Vail Intelligenta’ Natalie Yaru was chosen as our, ‘Designer Of The Year’ for delivering a collection that was inspired by aviation, family and her attention to detail. ‘Stratos Vail Intelligenta,’ the tribal concept Yaru crafted for her collection, was meant to honor her late grandfather, Nicholas Yaru. He was an aeronautical engineer and senior VP at Hughes Aircraft. Yaru believed in honoring her grandfather not only for his monetary gift to her, one in which made it possible for Yaru to attend college, but for his gift to the aviation world. Yaru’s style of design is one where true patience is a virtue as this designer believes in crafting pieces slowly, paying close attention to every stitch, and embellishment—‘there are no limits’. ‘Stratos Vail Intelligenta’, is designed with a heavy hand. Yaru chose to focus on using a combination of leathers, selecting a variety of silk and wool blends. Her color palette admittedly was originally pulled for an, “all white collection” said, the designer, after which, Yaru decided to change her theme, opting to stay true to her roots and family. “I watched The Aviator and shortly thereafter decided to design a collection inspired by aviation. I fell in love with a Belstaff jacket, that Leonardo DiCaprio wore in the film. I knew then, that I wanted my collection to be heavily infused with leather. I love working with material that can be molded and formed into different silhouettes. Structure and shape are what inspire me and I used that as a catalyst to derive my pieces for the collection. ” Yaru’s collection was crafted beautifully, where each piece could be easily worn from the runway to the street. Her color-palette although minimal, was the perfect choice opting for more muted colors; off-white, cream, and heather gray were a subtle touch that when blended with fabric and form, delivered a collection that stood out from all the others. We are confident that with a bit more time, Natalie Yaru will be much more than Designer Of The Year, she just might soon be, a household name. -Dana Elizabeth 52 LA Fashion magazine 52 The The LA Fashion magazine 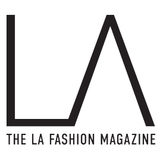