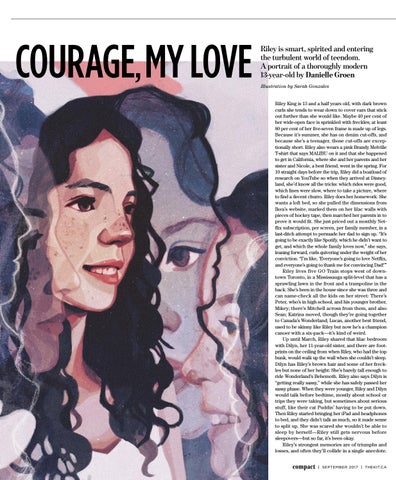 Riley is smart, spirited and entering the turbulent world of teendom. A portrait of a thoroughly modern 13-year-old by Danielle Groen Illustration by Sarah Gonzales Riley King is 13 and a half years old, with dark brown curls she tends to wear down to cover ears that stick out further than she would like. Maybe 40 per cent of her wide-open face is sprinkled with freckles; at least 80 per cent of her five-seven frame is made up of legs. Because it’s summer, she has on denim cut-offs, and because she’s a teenager, those cut-offs are exceptionally short. Riley also wears a pink Brandy Melville T-shirt that says MALIBU on it and that she happened to get in California, where she and her parents and her sister and Nicole, a best friend, went in the spring. For 10 straight days before the trip, Riley did a boatload of research on YouTube so when they arrived at Disneyland, she’d know all the tricks: which rides were good, which lines were slow, where to take a picture, where to find a decent churro. Riley does her homework. She wants a loft bed, so she pulled the dimensions from Ikea’s website, marked them on her lilac walls with pieces of hockey tape, then marched her parents in to prove it would fit. She just priced out a monthly Netflix subscription, per screen, per family member, in a last-ditch attempt to persuade her dad to sign up. “It’s going to be exactly like Spotify, which he didn’t want to get, and which the whole family loves now,” she says, leaning forward, curls quivering under the weight of her conviction. “I’m like, ‘Everyone’s going to love Netflix, and everyone’s going to thank me for convincing Dad!’” Riley lives five GO Train stops west of downtown Toronto, in a Mississauga split-level that has a sprawling lawn in the front and a trampoline in the back. She’s been in the house since she was three and can name-check all the kids on her street: There’s Peter, who’s in high school, and his younger brother, Mikey; there’s Mitchell across from them, and also Sean; Katrina moved, though they’re going together to Canada’s Wonderland; Lucas, another best friend, used to be skinny like Riley but now he’s a champion canoer with a six-pack—it’s kind of weird. Up until March, Riley shared that lilac bedroom with Dilyn, her 11-year-old sister, and there are footprints on the ceiling from when Riley, who had the top bunk, would walk up the wall when she couldn’t sleep. Dilyn has Riley’s brown hair and some of her freckles but none of her height: She’s barely tall enough to ride Wonderland’s Behemoth. Riley also says Dilyn is “getting really sassy,” while she has safely passed her sassy phase. When they were younger, Riley and Dilyn would talk before bedtime, mostly about school or trips they were taking, but sometimes about serious stuff, like their cat Puddin’ having to be put down. Then Riley started bringing her iPad and headphones to bed, and they didn’t talk as much, so it made sense to split up. She was scared she wouldn’t be able to sleep by herself—Riley still gets nervous before sleepovers—but so far, it’s been okay. Riley’s strongest memories are of triumphs and losses, and often they’ll collide in a single anecdote. Generation Z rules! For this issue, we talked to teens across the country about fashion and faith, beauty and boredom, popularity and politi...

Generation Z rules! For this issue, we talked to teens across the country about fashion and faith, beauty and boredom, popularity and politi...