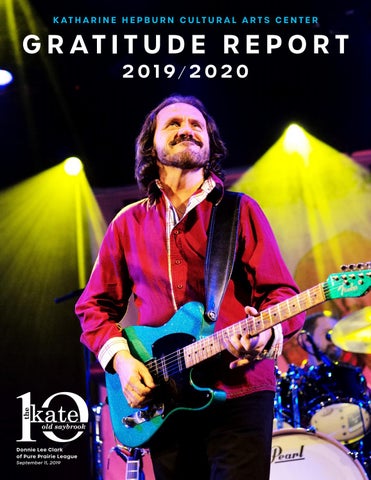 DEAR FRIENDS, The 2019–2020 fiscal year was to be a continuation of the Kate’s 10th anniversary celebration. However, in early March 2020 the Kate ceased all programming and, along with the rest of the world, waited for normal life to resume. Unfortunately we continue to wait. The staff and trustees of the Kate have relied heavily on a quote from Katharine Hepburn since the reality hit that the theater would be closed for quite some time. “The thing about life is that you must survive. Life is going to be difficult, and dreadful things will happen. What you do is move along, get on with it, and be tough. Not in the sense of being mean to others, but being tough with yourself and making a deadly effort not to be defeated.” As we reflect on this year, we focus on the ways we embraced our namesake’s fortitude and adapted to new challenges and pressures. We realized rather quickly that what matters most is YOU. If we could still connect with our audience and share exciting performing arts events, albeit virtually, we could meet our mission. Thank you for standing with us and continuing to engage with and support the Kate. Nothing can replace the magic of attending live music or theater in-person. That is why the Kate exists and it’s what we will return to very soon. We remain optimistic and excited about the future. Of course, before we entered the Covid-19 way of life, the Kate had accomplished a great deal and presented many months of arts and cultural programming. In that light, it is with gratitude we present the Kate’s annual report for the fiscal year July 1, 2019 through June 30, 2020.

J U LY July 1, 2019 marked the beginning of a new fiscal year and the midpoint of our 10th anniversary celebration. The Kate was bustling with live music by The Sensational Soul Cruisers, Dala, Jimmy Webb and much more. More than 130 children joined us for Kate’s Camp for Kids’ 8th year!

Pure Prairie League was the first artist to perform on the Kate stage at our opening on September 11, 2009. They returned, 10 years to the day, to help commemorate our 10th anniversary on September 11, 2019. Great performances by The Box Tops, Hollywood Nights and many others filled the rest of the month.

NOV E M B E R An abundance of good music and good will continued in November with the return of George Winston for two shows, Carmine Appice and Vanilla Fudge, and a favorite tradition— the Black Friday Concert to benefit the Shoreline Soup Kitchens and Pantries, matched by the Gowrie Challenge.

JA N UA RY The Saybrook Stage Company presented the heartwarming comedy On Golden Pond to honor the Kate’s 10th year. Smokin’ blues guitarist Tab Benoit made his Kate debut with a sold-out show and we launched the Kate Discovery Series, a program to highlight new artists, with pianist Barron Ryan. The cast of The Saybrook Stage Company’s On Golden Pond.

F E B RUA RY The shortest month of the year was one of the most active! The 10th annual Oscar Night Party, organized by the Kate Volunteer Guild, raised significant funds for our programs. Micky Dolenz and Eileen Ivers were among Kate favorite artists who returned. And, Karl Denson’s Tiny Universe completed the taping of season 5 of Connecticut Public’s The Kate.

Singer and multi-instrumentalist Karl Denson and his band the Tiny Universe. 2/11/20

We managed to present several wonderful events before the shut down. Among them, a Kate Children’s Series presentation of Treasure Island, the Metropolitan Opera in HD’s Agrippina, Lucy Kaplansky and Richard Shindell, and Aoife O’Donovan. The Tartan Terrors have the distinction of being the last live music show at the Kate in 2020.

A PRIL Staying home to stay safe was the new normal and so we were thrilled to be able to direct our audience to Connecticut Public’s season 5 of The Kate television show featuring an amazing line up—Kandace Springs, The Wood Brothers, Delbert McClinton, Marty Stuart and His Fabulous Superlatives, Joseph, and Karl Denson’s Tiny Universe.

M AY Good news to share! The Kate announced the recipients of its inaugural Katharine Hepburn Cultural Arts Center Scholarship. Old Saybrook High School seniors Margaret Maselli and Timothy Thomas were the 2020 recipients of the scholarship that was created in honor of the Kate’s 10th anniversary and recognizes students who demonstrate a passion for and participation in the arts. Country legend Marty Stuart and His Fabulous Superlatives. 11/13/19

J U NE While we could not gather together to celebrate our 180+ Volunteer Guild Members in 2020—as we have always done—we looked back on all of the great times that came before Covid-19. And, we optimistically look to many more.

Photo from the June 2019 Volunteer Guild spring appreciation party. Pictured are those who have volunteered for 10 years!

MEMBERS &amp; FRIENDS 2019 / 2020 Thank you for standing with the Kate! Your generosity has been our lifeline and inspiration. The following reflects gifts made from July 1, 2019 through June 30, 2020.