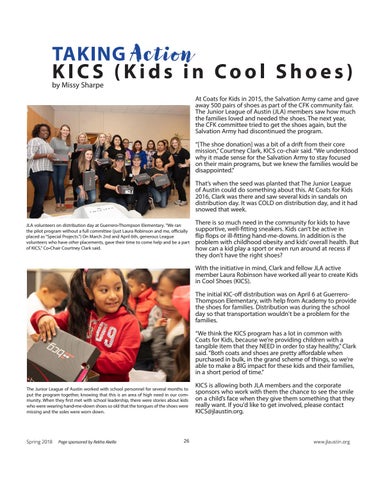 At Coats for Kids in 2015, the Salvation Army came and gave away 500 pairs of shoes as part of the CFK community fair. The Junior League of Austin (JLA) members saw how much the families loved and needed the shoes. The next year, the CFK committee tried to get the shoes again, but the Salvation Army had discontinued the program. “[The shoe donation] was a bit of a drift from their core mission,” Courtney Clark, KICS co-chair said. “We understood why it made sense for the Salvation Army to stay focused on their main programs, but we knew the families would be disappointed.” That’s when the seed was planted that The Junior League of Austin could do something about this. At Coats for Kids 2016, Clark was there and saw several kids in sandals on distribution day. It was COLD on distribution day, and it had snowed that week. JLA volunteers on distribution day at Guerrero-Thompson Elementary. "We ran the pilot program without a full committee (just Laura Robinson and me, officially placed as “Special Projects.”) On March 2nd and April 6th, generous League volunteers who have other placements, gave their time to come help and be a part of KICS," Co-Chair Courtney Clark said.

There is so much need in the community for kids to have supportive, well-fitting sneakers. Kids can’t be active in flip flops or ill-fitting hand-me-downs. In addition is the problem with childhood obesity and kids’ overall health. But how can a kid play a sport or even run around at recess if they don’t have the right shoes? With the initiative in mind, Clark and fellow JLA active member Laura Robinson have worked all year to create Kids in Cool Shoes (KICS). The initial KIC-off distribution was on April 6 at GuerreroThompson Elementary, with help from Academy to provide the shoes for families. Distribution was during the school day so that transportation wouldn't be a problem for the families. “We think the KICS program has a lot in common with Coats for Kids, because we’re providing children with a tangible item that they NEED in order to stay healthy,” Clark said. “Both coats and shoes are pretty affordable when purchased in bulk, in the grand scheme of things, so we’re able to make a BIG impact for these kids and their families, in a short period of time.”

The Junior League of Austin worked with school personnel for several months to put the program together, knowing that this is an area of high need in our community. When they first met with school leadership, there were stories about kids who were wearing hand-me-down shoes so old that the tongues of the shoes were missing and the soles were worn down.

KICS is allowing both JLA members and the corporate sponsors who work with them the chance to see the smile on a child’s face when they give them something that they really want. If you'd like to get involved, please contact KICS@jlaustin.org. 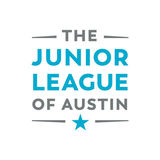 The Junior League of Austin