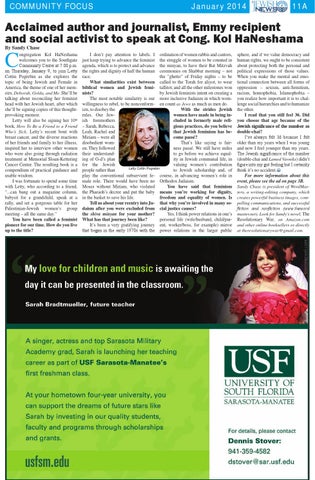 ongregation Kol HaNeshama welcomes you to the Southgate Community Center at 7:00 p.m. on Thursday, January 9, to join Letty Cottin Pogrebin as she explores the topic of being Jewish and Female in America, the theme of one of her memoirs, Deborah, Golda, and Me. She’ll be talking about reconciling her feminist head with her Jewish heart, after which she’ll be signing copies of this thoughtprovoking memoir. Letty will also be signing her 10th book, How To Be a Friend to a Friend Who’s Sick. Letty’s recent bout with breast cancer, and the diverse reactions of her friends and family to her illness, inspired her to interview other women who were also going through radiation treatment at Memorial Sloan-Kettering Cancer Center. The resulting book is a compendium of practical guidance and usable wisdom. I was fortunate to spend some time with Letty, who according to a friend, “...can bang out a magazine column, babysit for a grandchild, speak at a rally, and set a gorgeous table for her Palestinian-Jewish women’s group meeting – all the same day.” You have been called a feminist pioneer for our time. How do you live up to the title?

I don’t pay attention to labels. I ordination of women rabbis and cantors, sphere, and if we value democracy and just keep trying to advance the feminist the struggle of women to be counted in human rights, we ought to be consistent agenda, which is to protect and advance the minyan, to have their Bat Mitzvah about protecting both the personal and the rights and dignity of half the human ceremonies on Shabbat morning – not political expressions of those values. the “ghetto” of Friday nights – to be When you make the mental and emorace. What similarities exist between called to the Torah for aliyot, to wear tional connection between all forms of biblical women and Jewish femi- tallitot, and all the other milestones won oppression – sexism, anti-Semitism, by Jewish feminists intent on creating a racism, homophobia, Islamophobia – nists? The most notable similarity is our more inclusive Judaism in which wom- you realize how important it is to challenge social hierarchies and to humanize willingness to rebel, to be nonconform- en count as Jews as much as men do. With the strides Jewish the other. ists, to disobey the I read that you still feel 36. Did women have made in being inrules. Our Jewcluded in formerly male reli- you choose that age because of the ish foremothers gious practices, do you believe Jewish significance of the number as – Sarah, Rebecca, that Jewish feminism has be- double-chai? Leah, Rachel and I’ve always felt 36 because I felt come passé? Miriam – were all That’s like saying is fair- older than my years when I was young disobedient womness passé. We still have miles and now I feel younger than my years. en. They followed to go before we achieve equal- The Jewish significance of the number their understandity in Jewish communal life, in (double-chai and Lamed Vavniks) didn’t ing of G-d’s plan valuing women’s contribution figure into my gut feeling but I certainly for the Jewish Letty Cottin Pogrebin to Jewish scholarship and, of think it’s no accident. people rather than For more information about this course, in Author advancingand women’s role in play the conventional subservient fe-Renowned Journalist event, please see the ad on page 3B. Judaism. male role. There would have been no OrthodoxEmmy Recipient and Social Activist You have said that feminism Sandy Chase is president of WordMasMoses without Miriam, who violated ters, a writing-editing company, which working for dignity,OGREBIN the Pharaoh’s decree and put the baby means you’re ETTY OTTIN freedom and equality of women. Is creates powerful business images, comin the basket to save his life. speak involved at Congregation pelling communications, and successful in many Kol so- HaNeshama Tell us about your reentry into Ju- that whytoyou’re fiction and nonfiction (www.theword daism after you were excluded from cial justice causes? Southgate Community Center the shiva minyan for yourJANUARY mother? 9th, 7:00 Yes. I PM think· power relations in one’s master.net). Look for Sandy’s novel, The 3145 Southgate Circle · Sarasota personal life (wife/husband, child/par- Resolutionary War, on Amazon.com What has that journey been like? ent, worker/boss, for example) mirror and other online booksellers or directly It’s been a very gratifying $10 journey for non-members of KH · Reservations Required that began in the early 1970s with Buffet the power Dessert followingrelations Lecture in the larger public at theresolutionarywar@gmail.com.

Seating is limited for this Outstanding One Time Special Event.