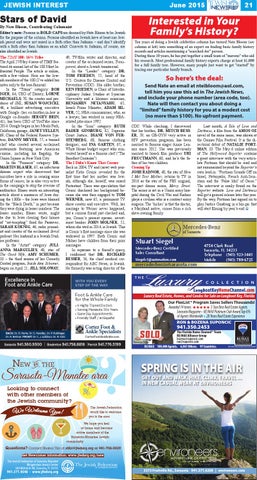 By Nate Bloom, Contributing Columnist Editor’s note: Persons in BOLD CAPS are deemed by Nate Bloom to be Jewish for the purpose of the column. Persons identified as Jewish have at least one Jewish parent and were not raised in a faith other than Judaism – and don’t identify with a faith other than Judaism as an adult. Converts to Judaism, of course, are also identified as Jewish. The TIME 100: 16% Tribe The April 27/May 4 issue of TIME featured its annual list of the 100 Most Influential People. The article is online, with a few videos. Here are the Jewish members of the 100 (I’ve added bio notes only to the less-famous): In the “Titans” category: BOB IGER, 64, CEO of Disney; LORNE MICHAELS, 70, the creator and producer of SNL; SUSAN WOJCICKI, 46, a brilliant advertising executive with Google (her ex-brother-in-law is Google co-founder SERGEY BRIN, 41), has been CEO of YouTube since 2014. Google began in her Menlo Park, California, garage; JANET YELLEN, 69, Chair of the Federal Reserve System; DANNY MEYER, 57, a trained chef who created several acclaimed restaurants featuring new American cuisine, including his flagship, the Union Square in New York City. In the “Pioneers” category: DR. MARTIN BLASER, 67, an infectious disease expert who discovered that microbes have a role in causing some forms of cancer, he is also very active in the campaign to stop the overuse of antibiotics. Blaser wrote an interesting article about a massacre of Jews during the 1300s – the Jews were blamed for the “Black Death,” in part because they were dying in lesser numbers. The lesser number, Blaser wrote, might be due to Jews clearing their homes of “rat-tempting” food for Passover; SARAH KOENIG, 46, radio journalist and creator of the acclaimed Serial podcast. Her husband is a Jewish Studies professor. In the “Artist” category: JULIANNA MARGULIES, 48, star of The Good Wife; AMY SCHUMER, 33 – the third season of her Comedy Central program, Inside Amy Schumer, began on April 21; JILL SOLOWAY,

49, TV/film writer and director, and creator of the acclaimed series, Transparent, about a Jewish transsexual. In the “Leader” category: DR. TOM FRIEDEN, 55, head of the U.S. Centers for Disease Control and Prevention (CDC). His older brother, KEN FRIEDEN, is Chair of Interdisciplinary Judaic Studies at Syracuse University and a klezmer musician; BENJAMIN NETANYAHU, 65, Israeli Prime Minister; ADAM SILVER, 52, NBA commissioner, who, as a lawyer, has worked in many NBArelated jobs since 1992. In the “Icon” category: RUTH BADER GINSBURG, 82, Supreme Court Justice; DIANE VON FURSTENBERG, 68, famous clothing designer; and INA GARTEN, 67, a White House budget expert who reinvented herself as a famous chef (“The Barefoot Contessa”). The I Didn’t Know That Corner Back in 2004, TV and (now) web journalist Katie Couric revealed for the first time that her mother was Jewish, although she, herself, was raised Protestant. There was speculation that Couric disclosed her background because she was then engaged to TOM WERNER, now 65, a prominent TV show creator and executive. Well, her marriage to Werner never happened, but a curious friend just checked and, yes, Couric’s present spouse, investment banker JOHN MOLNER, 52, whom she wed in 2014, is Jewish. This is Couric’s first marriage since she was widowed in 1997. Both Couric and Molner have children from their prior marriages. In repsonse to a friend’s query, I confirmed that DR. RICHARD BESSER, 56, the chief medical correspondent for ABC News, is Jewish. He formerly was acting director of the

Excellence in Foot and Ankle Care

WITH YOU EVERY STEP OF THE WAY.

Ten years of doing a Jewish celebrities column has turned Nate Bloom (see column at left) into something of an expert on finding basic family history records and articles mentioning a “searched-for” person. During these 10 years, he has put together a small team of “mavens” who aid his research. Most professional family history experts charge at least $1,000 for a full family tree. However, many people just want to get “started” by tracing one particular family branch.

So here’s the deal: Send Nate an email at nteibloom@aol.com, tell him you saw this ad in The Jewish News, and include your phone number (area code, too). Nate will then contact you about doing a “limited” family history for you at a modest cost (no more than $100). No upfront payment.

Last month, A Tale of Love and Darkness, a film from the AMOS OZ novel of the same name, was shown at the Cannes Film Festival. It is the directorial debut of NATALIE PORTMAN, 33. The May 6 online edition of The Hollywood Reporter contains a great interview with the very articulate Portman that should be read and not summarized beyond the Reporter’s own lead-in: “Portman Sounds Off on Israel, Netanyahu, French Anti-Semitism and the ‘False Idol’ of Oscar.” The interview is easily found on the Reporter website. Love and Darkness will get a general release later this year. By the way, Portman has signed on to play Justice Ginsburg in a bio-pic that will start filming by year’s end.

CDC. While checking, I discovered that his brother, DR. MITCH BESSER, 59, an OB-GYN very active in HIV prevention programs, has been married to famous singer Annie Lennox since 2012. She was previously married to Israeli film producer URI FRUCTMANN, 60, and he’s the father of her two children. Coming Up JOSH RADNOR, 40, the star of How I Met Your Mother, returns to TV in 2016 as the star of the PBS original, six-part drama series, Mercy Street. The series is set in a Union army hospital during the Civil War and Radnor plays a civilian who is a contract army surgeon. The ‘kicker’ is that the doctor, a Maryland native, comes from a rich slave-owning family.

Each office independently owned and operated.

SPRING IS IN THE AIR GET OUT AND WALK, HIKE, CLIMB, TRAVEL … IN NEW CASUAL WEAR AT ENVIRONEERS

Looking to connect with other members of the Jewish community?

The Jewish Federation would like to welcome you to the area. We hope you feel at home and become active members of the Sarasota-Manatee Jewish community.