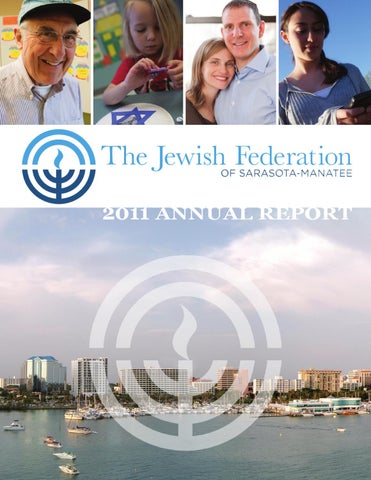 Welcome to your Federation

OUR MISSION To save Jewish lives and enhance Jewish life in Sarasota-Manatee, in Israel and around the world.

Report Highlights With your generous donations, the 2011 Comprehensive Development Campaign raised over $5 million! Our mission is to save Jewish lives and enhance Jewish life in Sarasota-Manatee, in Israel and around the world. Our vision is a vibrant Jewish community. With your generous support this year, we were able to feed hungry Jewish families both locally and abroad. We sent Jewish children to Jewish summer day and overnight camps where they enhanced their connection to Judaism. Jewish teenagers bared witness to the atrocities of the Holocaust on the March of the Living mission and, typically for their first time, our Bob Malkin Young Ambassadors experienced the wonders of Israel. Our Federation continued to meet the challenges of modern Jewish life and provided the necessary financial resources needed to fund our myriad services, programs and activities that were demanded of us in order to not only sustain, but continue to grow the Jewish community in Sarasota-Manatee. - Over 3,000 community members helped our annual campaign reach $2.275 million. - $918,000 of designated gifts were raised to support local, national and international organizations. - Our wide array of events open to the community contributed $97,000 in revenue. - Sponsorships of our wonderful community programs raised over $377,000. - The Flanzer-Weinberg Building was bustling with visitors and our rental income from the property was approximately $244,500. - $1.3 million was contributed to our Endowment Funds. - Advertising in The Jewish News and Connections Magazine raised an additional $192,000. 2

Report Details Around ten years ago, The Jewish Federation of Sarasota-Manatee (Federation) embarked on a journey to be relevant and responsive to our Jewish communities locally, nationally and globally. In the process, Federation recognized the need to change its overall financial funding model, no longer relying only on an annual fundraising campaign to address the needs of our Jewish community.

“... the Federation is proud to be a financially responsible organization that has no debt, a healthy balance sheet, and generous donors.”

Today, the Federation’s financial resources come from multiple sources. In addition to the annual campaign, which is still the Federation’s main revenue source, increased funding comes from designated gifts -- gifts designated by donors for a specific Federation related program or purpose or to be used by another local, national or overseas notfor-profit organization to meet its needs. Federation also generates income by selling advertising in our Jewish News publication, Connections magazine, and through various sponsorships from businesses and individuals. When the Jewish Community Center closed its doors a few years ago, the Federation ultimately assumed the responsibility of maintaining the JCC buildings and the campus. In addition to continuing to host various Jewish community programs and events, we are also renting the facilities to certain outside organizations for their programs. Rental income is helping us cover some of the costs of maintaining this community resource. Similar to other large not-for-profit entities, Federation leadership realizes that our future depends on building a large and well managed

endowment fund. The goal is to build the endowment so that more programming and social needs can be met through restricted fund purposes, as well as increased investment income. We currently have many generous donors in our community participating in our various endowment fund programs and we are looking forward to significantly expanding overall participation and funding in future years. Ten years ago, due to the size and timing of the annual fundraising campaign and the significant ongoing needs of our Jewish communities, both locally and globally, the Federation was required at times to spend or commit the use of funds in

advance of raising funds in a particular year. Given the economic downturn in recent years, as well as uncertainties relative to unbudgeted emergency situations, this financial model was not as fiscally responsible as we would have preferred. Federation leadership has worked diligently in recent years to accumulate operating and endowment fund reserves to help mitigate any unforeseen needs of our precious financial resources. We have hard-working Overseas and Domestic Granting Committees and various underlying approval processes to ensure that direct spending for Federation programs, as well as grants 4

made to other organizations receiving Federation dollars, are used appropriately. We also have a diligent Investment Committee that effectively manages and monitors our investments and underlying transactions in a fiscally responsible manner.

“... to be relevant and responsive to our Jewish communities locally, nationally and globally.”

The Federation budget and ongoing financial operations are reviewed and approved by our Finance Committee, Executive Committee and Board of Directors. Federation’s financial statements are prepared and presented to the Board on a monthly basis and are audited annually by an independent CPA firm. Federation also files an annual tax return, IRS Form 990, which provides details of our income, expenses and other financial activities, in accordance with IRS disclosure requirements. You can view a copy of our latest Form 990 on our website at www.jfedsrq.org. In these economically challenging and uncertain times, the Federation is proud to be a financially responsible organization that has no debt, a healthy balance sheet, and generous donors who are committed to supporting our Jewish communities locally, nationally and globally. We welcome you to join us to ensure your Federation’s future to meet its mission:

The Robert and Esther Heller Israel Advocacy Initiative provided our community with opportunities to advocate for Israel, fight the Boycott, Divestment and Sanctions movement against Israel, and offered a look at Israel “beyond the conflict” through cultural arts programs, such as A Night to Celebrate Israel with Noa and former Soviet refusnik Natan Sharansky, chairman of The Jewish Agency for Israel. Federation continued its commitment to Israel travel for all ages through the Bob Malkin Young Ambassadors program, March of the Living and the National Young Leadership Mission. In addition, Federation entered into a partnership with the community of Kiryat Yam, Israel for the purposes of creating a “living bridge” between the two communities. Local delegates traveled to Kiryat Yam to build the relationship. 6

The Jewish Film Festival continued to delight audiences with five films, each providing a unique perspective into Jewish history and life experiences. The event featured a special appearance by stage and screen legend Tovah Feldshuh. The Federation sponsored a Holocaust Boxcar display at an area school. Our funding also provided for teacher training to offer educators valuable teaching tips on how to use this display as part of their curriculum. Our partnerships with community organizations such as Coexistence, Inc., Van Wezel Performing Arts Hall, Selby Gardens, Youth Experiencing Art (YEA), and the Sarasota Ballet provided Jewish cultural arts programming to the entire community.

2011 Board &amp; Staff Board of DIRECTORS

Federation Honor Roll The assistance and programming The Jewish Federation of Sarasota-Manatee provides are all made possible by the generosity of the donors on this list. On behalf of the people who will benefit from your support, we thank you. In addition to the individuals recognized on this list, many other generous donors have requested that their names not be published. * of blessed memory

“I clearly see the great needs our people face and I realize that we really must be our brothers’ keepers, and that we all share this responsibility, because if we don’t ... who will?” 23

Federation Fundholders At The Jewish Federation of Sarasota-Manatee, we appreciate our fundholders. Without your continued generosity, we would be unable to address the ongoing needs in the Jewish community. Your legacy will provide for generations to come. * of blessed memory

The Jewish Federation of Sarasota-Manatee presents the 2011 Annual Report