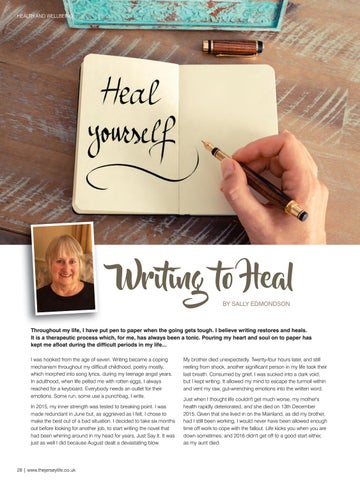 Writing to Heal BY SALLY EDMONDSON

Throughout my life, I have put pen to paper when the going gets tough. I believe writing restores and heals. It is a therapeutic process which, for me, has always been a tonic. Pouring my heart and soul on to paper has kept me afloat during the difficult periods in my life... I was hooked from the age of seven. Writing became a coping mechanism throughout my difficult childhood, poetry mostly, which morphed into song lyrics, during my teenage angst years. In adulthood, when life pelted me with rotten eggs, I always reached for a keyboard. Everybody needs an outlet for their emotions. Some run, some use a punchbag, I write. In 2015, my inner strength was tested to breaking point. I was made redundant in June but, as aggrieved as I felt, I chose to make the best out of a bad situation. I decided to take six months out before looking for another job, to start writing the novel that had been whirring around in my head for years, Just Say It. It was just as well I did because August dealt a devastating blow.

My brother died unexpectedly. Twenty-four hours later, and still reeling from shock, another significant person in my life took their last breath. Consumed by grief, I was sucked into a dark void, but I kept writing. It allowed my mind to escape the turmoil within and vent my raw, gut-wrenching emotions into the written word. Just when I thought life couldn't get much worse, my mother's health rapidly deteriorated, and she died on 13th December 2015. Given that she lived in on the Mainland, as did my brother, had I still been working, I would never have been allowed enough time off work to cope with the fallout. Life kicks you when you are down sometimes, and 2016 didn't get off to a good start either, as my aunt died. IN HEALTH AND HOPE - Merry Christmas and Healthy New Year

IN HEALTH AND HOPE - Merry Christmas and Healthy New Year