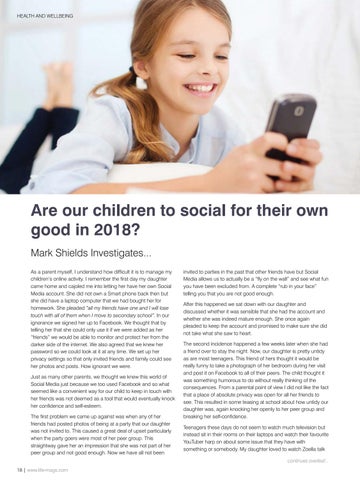 Are our children to social for their own good in 2018? Mark Shields Investigates... As a parent myself, I understand how difficult it is to manage my children’s online activity. I remember the first day my daughter came home and cajoled me into letting her have her own Social Media account. She did not own a Smart phone back then but she did have a laptop computer that we had bought her for homework. She pleaded “all my friends have one and I will lose touch with all of them when I move to secondary school”. In our ignorance we signed her up to Facebook. We thought that by telling her that she could only use it if we were added as her “friends” we would be able to monitor and protect her from the darker side of the internet. We also agreed that we knew her password so we could look at it at any time. We set up her privacy settings so that only invited friends and family could see her photos and posts. How ignorant we were. Just as many other parents, we thought we knew this world of Social Media just because we too used Facebook and so what seemed like a convenient way for our child to keep in touch with her friends was not deemed as a tool that would eventually knock her confidence and self-esteem. The first problem we came up against was when any of her friends had posted photos of being at a party that our daughter was not invited to. This caused a great deal of upset particularly when the party goers were most of her peer group. This straightway gave her an impression that she was not part of her peer group and not good enough. Now we have all not been

invited to parties in the past that other friends have but Social Media allows us to actually be a “fly on the wall” and see what fun you have been excluded from. A complete “rub in your face” telling you that you are not good enough. After this happened we sat down with our daughter and discussed whether it was sensible that she had the account and whether she was indeed mature enough. She once again pleaded to keep the account and promised to make sure she did not take what she saw to heart. The second incidence happened a few weeks later when she had a friend over to stay the night. Now, our daughter is pretty untidy as are most teenagers. This friend of hers thought it would be really funny to take a photograph of her bedroom during her visit and post it on Facebook to all of their peers. The child thought it was something humorous to do without really thinking of the consequences. From a parental point of view I did not like the fact that a place of absolute privacy was open for all her friends to see. This resulted in some teasing at school about how untidy our daughter was, again knocking her openly to her peer group and breaking her self-confidence. Teenagers these days do not seem to watch much television but instead sit in their rooms on their laptops and watch their favourite YouTuber harp on about some issue that they have with something or somebody. My daughter loved to watch Zoella talk continues overleaf...