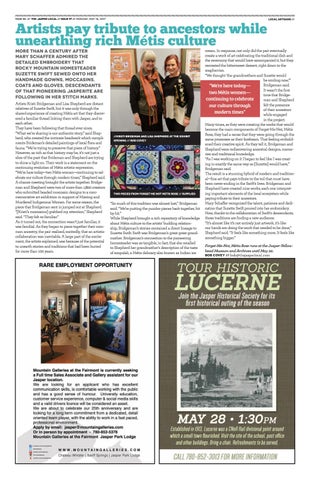 More than a century after Mary Schaffer admired the detailed embroidery that Rocky Mountain homesteader Suzette Swift sewed onto her handmade gowns, moccasins, coats and gloves, descendants of that pioneering Jasperite are following in her stitch marks.

Artists Kristi Bridgeman and Lisa Shepherd are distant relatives of Suzette Swift, but it was only through the shared experience of creating Métis art that they discovered a familiar thread linking them with Jasper, and to each other. They have been following that thread ever since. “What we’re sharing is our authentic story,” said Shepherd, who created the intricate beadwork which compliments Brideman’s detailed paintings of local flora and fauna. “We’re trying to preserve that piece of history.” However, as rich as that history may be, it’s not just a slice of the past that Brideman and Shepherd are trying to shine a light on. Their work is a statement on the continuing evolution of Métis artistic expression. “We’re here today—two Métis women—continuing to celebrate our culture through modern times,” Shepherd said. A chance meeting brought the artists together. Bridgeman and Shepherd were two of more than 1,800 creators who submitted beaded moccasin designs to a commemorative art exhibition in support of Missing and Murdered Indigenous Women. For some reason, the piece that Bridgeman sent in jumped out at Shepherd. “[Kristi’s moccasins] grabbed my attention,” Shepherd said. “They felt so familiar.” As it turned out, the connection wasn’t just familiar, it was familial. As they began to piece together their common ancestry, the pair realized, excitedly, that an artistic collaboration was inevitable. A large part of the excitement, the artists explained, was because of the potential to unearth stories and traditions that had been buried for more than 100 years.

TWO PIECES FROM FORGET ME NOT METIS ROSE // SUPPLIED

“So much of this tradition was almost lost,” Bridgeman said. “We’re putting the puzzles pieces back together, bit by bit.” While Shepherd brought a rich repository of knowledge about Métis culture to the artists’ budding relationship, Bridgeman’s stories contained a direct lineage to Suzette Swift: Swift was Bridgeman’s great great grandmother. Bridgeman’s connection to the pioneering homesteader was so tangible, in fact, that she recalled to Shepherd her grandmother’s description of the taste of soopalali, a Métis delicacy also known as Indian ice

cream. In response, not only did the pair eventually create a work of art celebrating the traditional dish and the ceremony that would have accompanied it, but they recreated the bittersweet dessert, right down to the soapberries. “We thought ‘the grandmothers and Suzette would be smiling now,’” Bridgeman said. “We’re here today— It wasn’t the first two Métis women— time that Bridgecontinuing to celebrate man and Shepherd felt the presence our culture through of their ancestors modern times” while engaged in the project. Many times, as they were creating the works that would become the main components of Forget-Me-Not, Métis Rose, they had a sense that they were going through the same processes as their forebears. That feeling emboldened their creative spirit. As they tell it, Bridgeman and Shepherd were rediscovering ancestral designs, memories and traditional knowledge. “As I was working on it I began to feel like I was creating in exactly the same way as [Suzette] would have,” Bridgeman said. The result is a stunning hybrid of modern and traditional—fine art that pays tribute to the toil that must have been never-ending in the Swift’s lives. Bridgeman and Shepherd have created nine works, each one interpreting important elements of the local ecosystem while paying tribute to their ancestors. Mary Schaffer recognized the talent, patience and dedication that Suzette Swift poured into her embroidery. Now, thanks to the collaboration of Swift’s descendants, those traditions are finding a new audience. “It’s almost like it’s not entirely just artwork, it’s like our hands are doing the work that needed to be done,” Shepherd said. “It feels like something more. It feels like something bigger.” Forget-Me-Not, Métis Rose runs at the Jasper-Yellowhead Museum and Archives until May 22. 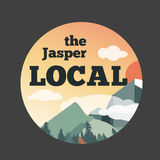