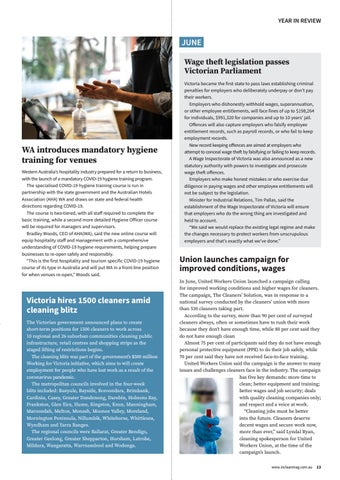 WA introduces mandatory hygiene training for venues Western Australia’s hospitality industry prepared for a return to business, with the launch of a mandatory COVID-19 hygiene training program. The specialised COVID-19 hygiene training course is run in partnership with the state government and the Australian Hotels Association (AHA) WA and draws on state and federal health directions regarding COVID-19. The course is two-tiered, with all staff required to complete the basic training, while a second more detailed Hygiene Officer course will be required for managers and supervisors. Bradley Woods, CEO of AHA(WA), said the new online course will equip hospitality staff and management with a comprehensive understanding of COVID-19 hygiene requirements, helping prepare businesses to re-open safely and responsibly. “This is the first hospitality and tourism specific COVID-19 hygiene course of its type in Australia and will put WA in a front-line position for when venues re-open,” Woods said.

Victoria became the first state to pass laws establishing criminal penalties for employers who deliberately underpay or don’t pay their workers. Employers who dishonestly withhold wages, superannuation, or other employee entitlements, will face fines of up to $198,264 for individuals, $991,320 for companies and up to 10 years’ jail. Offences will also capture employers who falsify employee entitlement records, such as payroll records, or who fail to keep employment records. New record keeping offences are aimed at employers who attempt to conceal wage theft by falsifying or failing to keep records. A Wage Inspectorate of Victoria was also announced as a new statutory authority with powers to investigate and prosecute wage theft offences. Employers who make honest mistakes or who exercise due diligence in paying wages and other employee entitlements will not be subject to the legislation. Minister for Industrial Relations, Tim Pallas, said the establishment of the Wage Inspectorate of Victoria will ensure that employers who do the wrong thing are investigated and held to account. “We said we would replace the existing legal regime and make the changes necessary to protect workers from unscrupulous employers and that’s exactly what we’ve done.”

Union launches campaign for improved conditions, wages In June, United Workers Union launched a campaign calling for improved working conditions and higher wages for cleaners. The campaign, The Cleaners’ Solution, was in response to a national survey conducted by the cleaners’ union with more than 530 cleaners taking part. According to the survey, more than 90 per cent of surveyed cleaners always, often or sometimes have to rush their work because they don’t have enough time, while 80 per cent said they do not have enough clean Almost 75 per cent of participants said they do not have enough personal protective equipment (PPE) to do their job safely, while 70 per cent said they have not received face-to-face training. United Workers Union said the campaign is the answer to many issues and challenges cleaners face in the industry. The campaign has five key demands: more time to clean; better equipment and training; better wages and job security; deals with quality cleaning companies only; and respect and a voice at work. “Cleaning jobs must be better into the future. Cleaners deserve decent wages and secure work now, more than ever,” said Lyndal Ryan, cleaning spokesperson for United Workers Union, at the time of the campaign’s launch. www.incleanmag.com.au 13