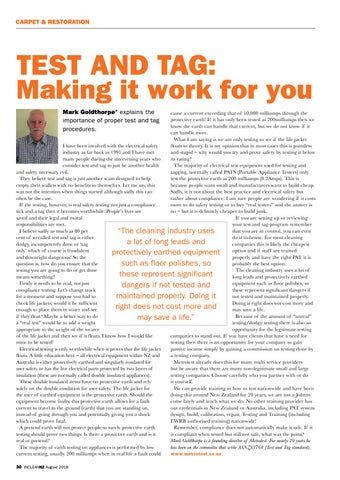 TEST AND TAG: Making it work for you Mark Goldthorpe* explains the importance of proper test and tag procedures.

cause a current exceeding that of 10,000 milliamps through the protective earth! If it has only been tested at 200milliamps then we know the earth can handle that current, but we do not know if it can handle more. What I am saying is we are only testing to see if the life jacket I have been involved with the electrical safety floats in theory. It is my opinion that in most cases this is pointless industry as far back as 1991 and I have met and stupid – why would you try and prove safety by testing it below many people during the intervening years who its rating? consider test and tag to just be another health The majority of electrical test equipment used for testing and and safety necessary evil. tagging, normally called PATS (Portable Appliance Testers) only They believe test and tag is just another scam designed to help test the protective earth at 200 milliamps (0.2Amps). This is empty their wallets with no benefits to themselves. Let me say, this because people want small and manufacturers want to build cheap. was not the intention when things started although sadly this can Sadly, it is not about the best practice and electrical safety but often be the case. rather about compliance. I am sure people are wondering if it costs If the testing, however, is real safety testing not just a compliance more to do safety testing or to buy “real testers” and the answer is tick and a tag then it becomes worthwhile. People’s lives are no – but it is definitely cheaper to build junk. saved and their legal and moral If you are setting up or reviewing responsibilities are met. your test and tag program remember I believe sadly as much as 80 per that you are in control, you can even “The cleaning industry uses cent of so called test and tag is either do it in-house. For most cleaning a lot of long leads and dodgy, incompetently done or ‘tag companies this is likely the cheapest only’ which of course is fraudulent option and if staff are trained protectively earthed equipment and downright dangerous! So the properly and have the right PAT it is question is, how do you ensure that the probably the best option. such as floor polishes, so testing you are going to do or get done The cleaning industry uses a lot of these represent significant means something? long leads and protectively earthed Firstly it needs to be real, not just equipment such as floor polishes, so dangers if not tested and compliance testing. Let’s change track these represent significant dangers if for a moment and suppose you had to not tested and maintained properly. maintained properly. Doing it check life jackets; would it be sufficient Doing it right does not cost more and right does not cost more and enough to place them in water and see may save a life. if they float? Maybe a better way to do Because of the amount of “unreal” may save a life.” a “real test” would be to add a weight testing/dodgy testing there is also an appropriate to the weight of the wearer opportunity for the legitimate testing of the life jacket and then see if it floats. I know how I would like companies to stand out. If you have clients that have a need for mine to be tested! testing then there is an opportunity for your company to gain Electrical testing is only worthwhile when it proves that the life jacket passive income simply by gaining a commission on testing done by floats. A little education here – all electrical equipment within NZ and a testing company. Australia is either protectively earthed and singularly insulated for Metrotest already does this for many multi service providers user safety or has the live electrical parts protected by two layers of but be aware that there are many non-legitimate small and large insulation (these are normally called double insulated appliances). testing companies. Choose carefully who you partner with or do These double insulated items have no protective earth and rely it yourself. solely on the double insulation for user safety. The life jacket for We can provide training in how to test nationwide and have been the user of earthed equipment is the protective earth. Should the doing this around New Zealand for 20 years, we are not a Johnny equipment become faulty, this protective earth allows for a fault come lately and teach what we do. No other training provider has current to travel to the ground (earth) that you are standing on, our credentials in New Zealand or Australia, including PAT system instead of going through you and potentially giving you a shock design, build, calibration, repair, Testing and Training (including which could prove fatal. EWRB authorised training) nationwide! A pretend earth will not protect people so surely protective earth Remember, compliance does not automatically make it safe. If it testing should prove two things: Is there a protective earth and is it is compliant when tested but still not safe, what was the point? real or pretend? Mark Goldthorpe is a founding director of Metrotest. For nearly 20 years he The majority of earth testing on appliances is performed by low has been on the committee that write ASNZS3760 (Test and Tag standard). current testing, usually 200 milliamps when in real life a fault could www.metrotest.co.nz 30 INCLEANNZ August 2018