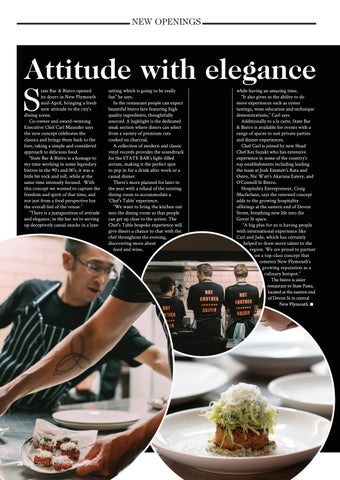 tate Bar & Bistro opened its doors in New Plymouth mid-April, bringing a fresh new attitude to the city’s dining scene. Co-owner and award-winning Executive Chef Carl Maunder says the new concept celebrates the classics and brings them back to the fore, taking a simple and considered approach to delicious food. “State Bar & Bistro is a homage to my time working in some legendary bistros in the 90’s and 00’s, it was a little bit rock and roll, while at the same time intensely focused. With this concept we wanted to capture the freedom and spirit of that time, and not just from a food perspective but the overall feel of the venue.” “There is a juxtaposition of attitude and elegance, in the bar we’re serving up deceptively casual snacks in a luxe

setting which is going to be really fun” he says. In the restaurant people can expect beautiful bistro fare featuring high quality ingredients, thoughtfully sourced. A highlight is the dedicated steak section where diners can select from a variety of premium cuts cooked on charcoal. A collection of modern and classic vinyl records provides the soundtrack for the STATE BAR’s light-filled atrium, making it the perfect spot to pop in for a drink after work or a casual dinner. There’s more planned for later in the year with a rehaul of the existing dining room to accommodate a ‘Chef’s Table’ experience. “We want to bring the kitchen out into the dining room so that people can get up close to the action. The Chef’s Table bespoke experience will give diners a chance to chat with the chef throughout the evening, discovering more about food and wine,

while having an amazing time, “It also gives us the ability to do more experiences such as oyster tastings, wine education and technique demonstrations,” Carl says. Additionally to a la carte, State Bar & Bistro is available for events with a range of spaces to suit private parties and dinner experiences. Chef Carl is joined by new Head Chef Kei Suzaki who has extensive experience in some of the country’s top establishments including leading the team at Josh Emmett’s Rata and Ostro, Nic Watt’s Akarana Eatery, and O’Connell St Bistro. Hospitality Entrepreneur, Craig Macfarlane, says the renewed concept adds to the growing hospitality offerings at the eastern end of Devon Street, breathing new life into the Gover St space.  “A big plus for us is having people with international experience like Carl and Jade, which has certainly helped to draw more talent to the region. We are proud to partner on a top-class concept that cements New Plymouth’s growing reputation as a culinary hotspot.” The bistro is sister restaurant to State Pasta, located at the eastern end of Devon St in central New Plymouth. n