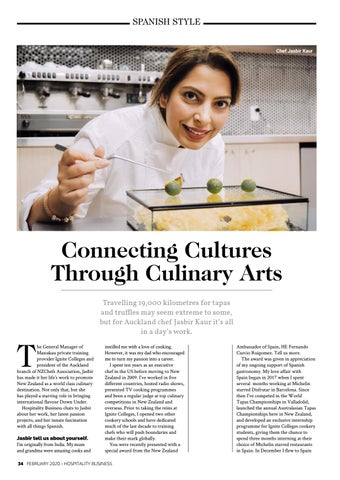 Connecting Cultures Through Culinary Arts Travelling 19,000 kilometres for tapas and truffles may seem extreme to some, but for Auckland chef Jasbir Kaur it’s all in a day’s work.

he General Manager of Manukau private training provider Ignite Colleges and president of the Auckland branch of NZChefs Association, Jasbir has made it her life’s work to promote New Zealand as a world class culinary destination. Not only that, but she has played a starring role in bringing international flavour Down Under. Hospitality Business chats to Jasbir about her work, her latest passion projects, and her innate fascination with all things Spanish. Jasbir tell us about yourself. I’m originally from India. My mum and grandma were amazing cooks and

instilled me with a love of cooking. However, it was my dad who encouraged me to turn my passion into a career. I spent ten years as an executive chef in the US before moving to New Zealand in 2009. I’ve worked in five different countries, hosted radio shows, presented TV cooking programmes and been a regular judge at top culinary competitions in New Zealand and overseas. Prior to taking the reins at Ignite Colleges, I opened two other cookery schools and have dedicated much of the last decade to training chefs who will push boundaries and make their mark globally. You were recently presented with a special award from the New Zealand

Ambassador of Spain, HE Fernando Curcio Ruigomez. Tell us more. The award was given in appreciation of my ongoing support of Spanish gastronomy. My love affair with Spain began in 2017 when I spent several months working at Michelin starred Disfrutar in Barcelona. Since then I’ve competed in the World Tapas Championships in Valladolid, launched the annual Australasian Tapas Championships here in New Zealand, and developed an exclusive internship programme for Ignite Colleges cookery students, giving them the chance to spend three months interning at their choice of Michelin starred restaurants in Spain. In December I flew to Spain

Hospitality Business is New Zealand’s independent source of news, insight, business advice and opinion for the hospitality and liquor sector...

Hospitality Business is New Zealand’s independent source of news, insight, business advice and opinion for the hospitality and liquor sector...