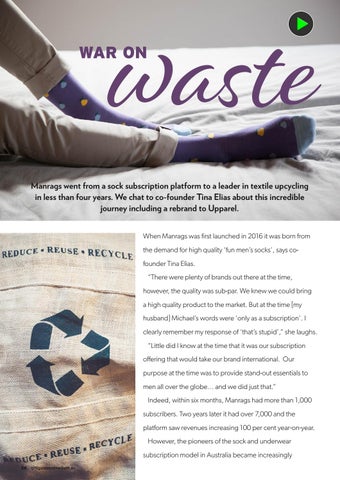 Manrags went from a sock subscription platform to a leader in textile upcycling in less than four years. We chat to co-founder Tina Elias about this incredible journey including a rebrand to Upparel.

When Manrags was first launched in 2016 it was born from the demand for high quality ‘fun men’s socks’, says cofounder Tina Elias. “There were plenty of brands out there at the time, however, the quality was sub-par. We knew we could bring a high quality product to the market. But at the time [my husband] Michael’s words were ‘only as a subscription’. I clearly remember my response of ‘that’s stupid’,” she laughs. “Little did I know at the time that it was our subscription offering that would take our brand international. Our purpose at the time was to provide stand-out essentials to men all over the globe… and we did just that.” Indeed, within six months, Manrags had more than 1,000 subscribers. Two years later it had over 7,000 and the platform saw revenues increasing 100 per cent year-on-year. However, the pioneers of the sock and underwear subscription model in Australia became increasingly 26  giftguideonline.com.au

Giftguide magazine is an award-winning bi-annual publication that is regarded by retailers as the ‘Bible’ of the gift and homewares industry...

Giftguide magazine is an award-winning bi-annual publication that is regarded by retailers as the ‘Bible’ of the gift and homewares industry...