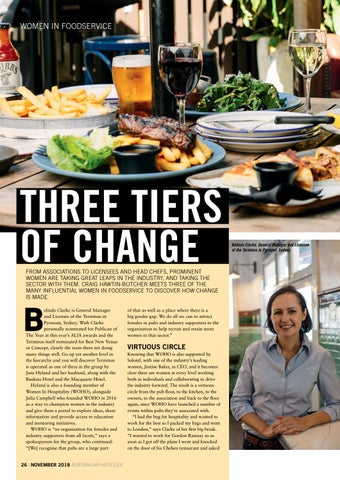 THREE TIERS OF CHANGE FROM ASSOCIATIONS TO LICENSEES AND HEAD CHEFS, PROMINENT WOMEN ARE TAKING GREAT LEAPS IN THE INDUSTRY, AND TAKING THE SECTOR WITH THEM. CRAIG HAWTIN-BUTCHER MEETS THREE OF THE MANY INFLUENTIAL WOMEN IN FOODSERVICE TO DISCOVER HOW CHANGE IS MADE.

elinda Clarke is General Manager and Licensee of the Terminus in Pyrmont, Sydney. With Clarke personally nominated for Publican of The Year at this year’s ALIA awards and the Terminus itself nominated for Best New Venue or Concept, clearly the team there are doing many things well. Go up yet another level in the hierarchy and you will discover Terminus is operated as one of three in the group by Jane Hyland and her husband, along with the Banksia Hotel and the Macquarie Hotel. Hyland is also a founding member of Women In Hospitality (WOHO), alongside Julia Campbell who founded WOHO in 2016 as a way to champion women in the industry and give them a portal to explore ideas, share information and provide access to education and mentoring initiatives. WOHO is “an organisation for females and industry supporters from all facets,” says a spokesperson for the group, who continued: “[We] recognise that pubs are a large part

of that as well as a place where there is a big gender gap. We do all we can to attract females in pubs and industry supporters to the organisation to help recruit and retain more women in that sector.”

VIRTUOUS CIRCLE Knowing that WOHO is also supported by Solotel, with one of the industry’s leading women, Justine Baker, as CEO, and it becomes clear there are women at every level working both as individuals and collaborating to drive the industry forward. The result is a virtuous circle from the pub floor, to the kitchen, to the owners, to the association and back to the floor again, since WOHO have launched a number of events within pubs they’re associated with. “I had the bug for hospitality and wanted to work for the best so I packed my bags and went to London,” says Clarke of her first big break. “I wanted to work for Gordon Ramsay so as soon as I got off the plane I went and knocked on the door of his Chelsea restaurant and asked

Belinda Clarke, General Manager and Licensee of the Terminus in Pyrmont, Sydney