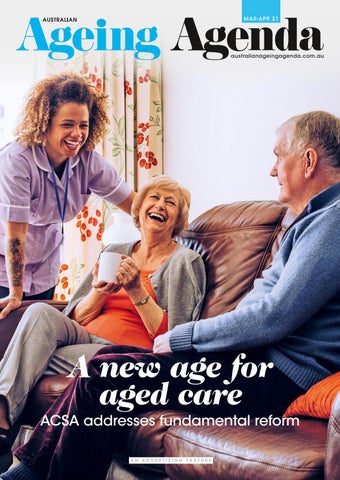 A new age for aged care

A new age for aged care With the royal commission’s two-year-plus inquiry now complete, the sector is called upon to lead the conversation on reforming aged care for long-lasting change.

he aged care sector has had to quickly learn and adapt over the past year due to many challenges arising from the global pandemic. Providers have had to rapidly boost infection control and prevention measures and roll out technology so aged care recipients can stay in touch with loved ones to name just two. They have also had to cope with extraordinary workforce and financial pressures, and all while under the national spotlight of a royal commission. The release of the Royal Commission into Aged Care Quality and Safety’s final report on 1 March means these rapid changes are set to continue in 2021 and beyond. With the report, the sector has a pathway to a new and world-class Australian aged care system based on a rights-based approach that aims to ensure seniors receive high quality services that meet their needs and choices. 26 | MARCH – APRIL 2021

The aged care sector needs to take the lead about what it wants from a future model and actively shape discussions on what an improved system looks like for residents, families, providers, staff and the community as a whole, says Patricia Sparrow, CEO of Aged and Community Services Australia.

SPONSORED FEATURE “Providers and the older people accessing aged care services should be leading the conversation about what world best aged care looks like, new approaches to regulation, the resources needed to solve funding and workforce issues, the role of technology and innovation, and the roadmap to get there,” Sparrow tells

The 33rd Aged and Community Services Australia National Online Summit provides an opportunity for providers to have these discussions. The summit, which takes place on 17 – 21 May, aims to explore the royal commission’s final report, discuss the government’s response to the recommendations and outline a way forward to a new age of aged care. Long-term funding sustainability is an important element of getting the new aged care system right, says Sparrow. “It’s clear in the royal commission report that services for older Australians, and as a result the sector, is underfunded. There needs to be a bipartisan approach to work out how we’re going to fund aged care into the future,” she says. “From my point of view and from the sector’s point of view, there are a whole lot of ways that the government can choose to fund the gap that we have. The Commission put forward a levy but ultimately we need the government to determine the approach.” There are many questions about whether the current mix of government funding and user contributions is right, says Sparrow. The royal commission report calls out that the current means testing approach is inequitable, particularly for people who just miss out on qualifying for the pension. “We need to ensure people who can afford to pay more are paying more. At the moment, we have groups of people who are just over pension eligibility paying more and there’s not enough differentiation between those people and those who are more financially able”.

Workforce key to quality Funding is also essential to improving workforce capacity, an issue of paramount concern, and a world-class system. The current shortages of

“We can’t let the reforms languish in a drawer. It’s got to be real and it’s got to involve a wide variety of groups to get the best outcome.”

workers across both health and aged care must be addressed to support the proposed reform agenda, Sparrow says. “We know that quality care must be quantified and appropriately costed and funded for the sector to be able to deliver it,” she says. “Fundamentally, we know our staff are underpaid, we know that we need more staff and we can’t fix that without additional investment in aged care services.” Providers must also do better on promoting aged care and what working in the sector has to offer for the full range of roles, says Sparrow. “I’m struck by the fact that we don’t do that as much as we should.” The royal commission’s recommendation to establish an aged care workforce planning division to help develop long-term strategies for staff is welcome but the issue is bigger than that, she says. “Workforce planning is critical to addressing where the workforce is going to come from and how we support them. But if we don’t also address career pathways, recruitment and retention, and pay equity and the fact that we don’t have enough staff, that they’re not well paid and that they can make more money down the road working elsewhere then we’re only going to have half of the solution.”

Person-centred care driving change Just as solving workforce issues is critical so is developing a new aged care act that ensures older people are at the centre of the new aged care system, Sparrow says. “The act will underpin everything and will drive the system. It’s critical to changing the way the system operates,” she says. The 1 July 2023 implementation date for the new act may seem far away but this time is necessary to ensure they get it right, says Sparrow. “We have to make sure that the changes they’re making are going to be achievable within a stressed and underfunded system, and government needs to be able to deliver on them properly. australianageingagenda.com.au

“We want to make sure that the reforms that are done are done properly. We need to strike that balance between speed and making sure that good reform is adequately developed, not hotchpotch and as a result out there creating other problems,” she says. ACSA will be working with government, older people and aged care clients and residents and their families to listen to their views and what they want and ensure the recommendations come to fruition, Sparrow says. “We can’t let the reforms languish in a drawer. It’s got to be real and it’s got to involve a wide variety of groups to get the best outcome”.

Need to get aged care right Dr John Hewson, economic expert and former leader of Australian Liberal Party while in opposition, says the aged care system is a major structural

challenge that has been getting worse over time. “It has been allowed to drift for at least a couple of decades,” Hewson tells AAA. “The overriding objective should be to get the aged care sector right. It needs good evidence-based policy to make it right,” says Hewson, a keynote speaker at the summit. On financing the aged care system, the aged care royal commissioners were unanimous in their assessment that the sector needed a significant funding boost. The Commissioners proposed different types of levies to achieve that, with Commissioner Briggs recommending a 1 per cent levy of taxable personal income, and Commissioner Pagone recommending the Productivity Commission undertake a study of a hypothecated levy. It is still too early to determine exactly how the system should be funded and how much it needs, but it requires a large figure, says Hewson, who was Australia’s shadow treasurer before becoming leader of the opposition in 1990. “The number is fairly large. It may be possible to do part of it by increasing the Medicare Levy, but the sort of increase that would be required to fund the total reform would be staggering,” he says. “It needs a proper objective assessment of alternative ways of funding it and the main ones are either the Medicare Levy, a special levy, or just general tax revenue.” There will have to be a significant budget reallocation to be able to deliver the scale of funding reform needed for aged care, he says.

Budget predictions In the upcoming Federal Budget, Hewson says he expects to see the government deliver more home care packages and make a funding commitment for residential aged care. “There’ll be some big headline announcements in the budget picking up some of the recommendations,” he says. However, 148 recommendations is a lot to digest, he adds. 28 | MARCH – APRIL 2021

SPONSORED FEATURE “You have a lot of other things to do to ensure that even when you get the right structure of residential aged care, for example, that then you have to get the right nursing support, the right training of those nurses and aged care staff and the right equipment. These are big areas that will require quite a lot of experience,” Hewson says. On whether the government will provide the significant funding needed, he says “governments are great at big announcements” with “big numbers” but are not as transparent down the track. “Unless you monitor it closely that’s the last you’ll hear about the detail of it. You won’t see how that money is actually spent or where it goes,” he says. “It’s more important to look at what they’re actually committed to and whether they can realistically deliver that.” Sparrow says the budget has to deliver significant long-term funding to the sector rather than more of the “Band-Aid” approach of recent years. “I believe there’s good intent, but we’ve seen that before. We’ve talked about the fact that there has been 20 reviews over 20 years but always, governments pick and choose some things. But this time has to be different, and it has to resolve the system financing funding issues. That’s the one that in the last 20 years that has been left largely untouched,” Sparrow says. “It needs a fundamental overhaul, not tinkering.”

Summit an opportune time to converge The summit will provide delegates an opportunity to discuss the royal commission’s final report and digest the government’s response in the budget, says Sparrow. “This is going to give us an opportunity with a lot of providers to talk about the government’s response to the overall reforms, where we’re sitting and what needs to be done,” she says. “Hopefully, the government will have announced in the budget what it’s going to do to make the sector sustainable. The summit is going to allow for a lot of these important conversations to happen.”

Key speakers will include: • A uthor and activist Ashton Applewhite will speak out against ageism • Businesswoman and sustainability advisor Sam Mostyn will talk about how the sector can better support its workforce, which is predominantly female and often not well paid or respected • Aged Care Quality and Safety Commissioner Janet Anderson will discuss reforms from the royal commission’s final report • Wintringham CEO Bryan Lipmann will explore aged care housing in the new age • ACIITC chair Dr George Margelis will present on technology in aged care • Paralympic gold medallist and disability rights advocate Kurt Fearnley will offer a unique insight into one of the our greatest challenges – how Australia can sustainably provide inclusive, culturally safe and quality aged care in all settings, whether in a person’s home and community, residential care or in retirement living

“The overriding objective should be to get the aged care sector right. It needs good evidencebased policy to make it right.”

Other key elements of aged care transformation that will be explored at the summit include adaptability, resilience and using technology to promote connection. Sparrow says delegates will leave the summit with takeaways for both themselves and their organisation. “This is a critical time for reform of the sector overall and we all have to work together to get the fundamental reform that we need. We’ll have heard the government’s response by then and the path will be clearer,” Sparrow says. “There are going to be several challenging presentations. But the path for reform will be clear for the first time in three years. We’ll know what the royal commission has recommended, and we’ll know what the government’s planning to do. “Come to the ACSA National Online Summit so we can work out our future together.” n ACSA National Online Summit 17 – 21 May W: acsasummit.com.au T: 03 6231 2999 E: mail@conferencedesign.com.au