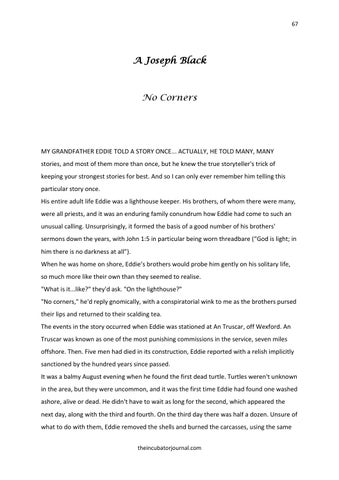 MY GRANDFATHER EDDIE TOLD A STORY ONCE... ACTUALLY, HE TOLD MANY, MANY stories, and most of them more than once, but he knew the true storyteller's trick of keeping your strongest stories for best. And so I can only ever remember him telling this particular story once. His entire adult life Eddie was a lighthouse keeper. His brothers, of whom there were many, were all priests, and it was an enduring family conundrum how Eddie had come to such an unusual calling. Unsurprisingly, it formed the basis of a good number of his brothers' sermons down the years, with John 1:5 in particular being worn threadbare (“God is light; in him there is no darkness at all”). When he was home on shore, Eddie’s brothers would probe him gently on his solitary life, so much more like their own than they seemed to realise. "What is it...like?" they'd ask. "On the lighthouse?" "No corners," he'd reply gnomically, with a conspiratorial wink to me as the brothers pursed their lips and returned to their scalding tea. The events in the story occurred when Eddie was stationed at An Truscar, off Wexford. An Truscar was known as one of the most punishing commissions in the service, seven miles offshore. Then. Five men had died in its construction, Eddie reported with a relish implicitly sanctioned by the hundred years since passed. It was a balmy August evening when he found the first dead turtle. Turtles weren't unknown in the area, but they were uncommon, and it was the first time Eddie had found one washed ashore, alive or dead. He didn't have to wait as long for the second, which appeared the next day, along with the third and fourth. On the third day there was half a dozen. Unsure of what to do with them, Eddie removed the shells and burned the carcasses, using the same theincubatorjournal.com

Fiction and memoir from NI and Ireland

Fiction and memoir from NI and Ireland