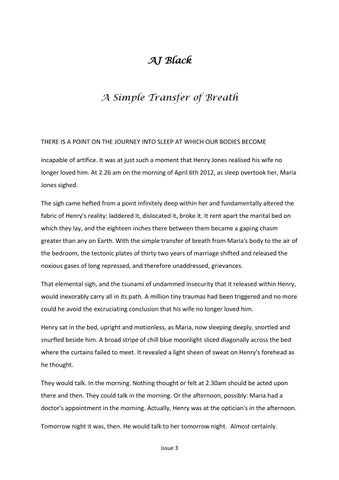 A Simple Transfer of Breath

THERE IS A POINT ON THE JOURNEY INTO SLEEP AT WHICH OUR BODIES BECOME incapable of artifice. It was at just such a moment that Henry Jones realised his wife no longer loved him. At 2.26 am on the morning of April 6th 2012, as sleep overtook her, Maria Jones sighed. The sigh came hefted from a point infinitely deep within her and fundamentally altered the fabric of Henry's reality: laddered it, dislocated it, broke it. It rent apart the marital bed on which they lay, and the eighteen inches there between them became a gaping chasm greater than any on Earth. With the simple transfer of breath from Maria's body to the air of the bedroom, the tectonic plates of thirty two years of marriage shifted and released the noxious gases of long repressed, and therefore unaddressed, grievances. That elemental sigh, and the tsunami of undammed insecurity that it released within Henry, would inexorably carry all in its path. A million tiny traumas had been triggered and no more could he avoid the excruciating conclusion that his wife no longer loved him. Henry sat in the bed, upright and motionless, as Maria, now sleeping deeply, snortled and snurfled beside him. A broad stripe of chill blue moonlight sliced diagonally across the bed where the curtains failed to meet. It revealed a light sheen of sweat on Henry's forehead as he thought. They would talk. In the morning. Nothing thought or felt at 2.30am should be acted upon there and then. They could talk in the morning. Or the afternoon, possibly: Maria had a doctor's appointment in the morning. Actually, Henry was at the optician's in the afternoon. Tomorrow night it was, then. He would talk to her tomorrow night. Almost certainly. issue 3

Fiction and essay from NI and Ireland

Fiction and essay from NI and Ireland