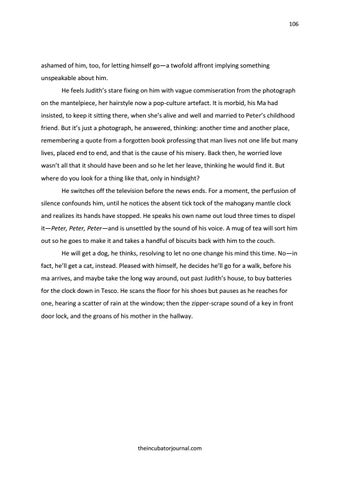 ashamed of him, too, for letting himself go—a twofold affront implying something unspeakable about him. He feels Judith’s stare fixing on him with vague commiseration from the photograph on the mantelpiece, her hairstyle now a pop-culture artefact. It is morbid, his Ma had insisted, to keep it sitting there, when she’s alive and well and married to Peter’s childhood friend. But it’s just a photograph, he answered, thinking: another time and another place, remembering a quote from a forgotten book professing that man lives not one life but many lives, placed end to end, and that is the cause of his misery. Back then, he worried love wasn’t all that it should have been and so he let her leave, thinking he would find it. But where do you look for a thing like that, only in hindsight? He switches off the television before the news ends. For a moment, the perfusion of silence confounds him, until he notices the absent tick tock of the mahogany mantle clock and realizes its hands have stopped. He speaks his own name out loud three times to dispel it—Peter, Peter, Peter—and is unsettled by the sound of his voice. A mug of tea will sort him out so he goes to make it and takes a handful of biscuits back with him to the couch. He will get a dog, he thinks, resolving to let no one change his mind this time. No—in fact, he’ll get a cat, instead. Pleased with himself, he decides he’ll go for a walk, before his ma arrives, and maybe take the long way around, out past Judith’s house, to buy batteries for the clock down in Tesco. He scans the floor for his shoes but pauses as he reaches for one, hearing a scatter of rain at the window; then the zipper-scrape sound of a key in front door lock, and the groans of his mother in the hallway.

Short fiction and memoir from NI and Ireland

Short fiction and memoir from NI and Ireland