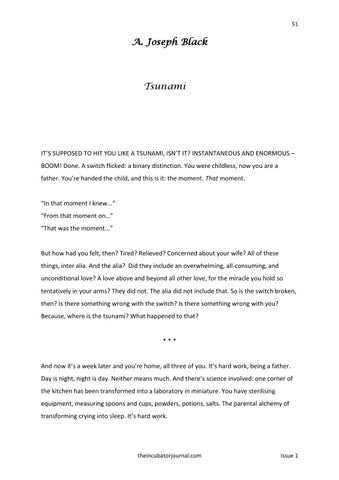 IT’S SUPPOSED TO HIT YOU LIKE A TSUNAMI, ISN’T IT? INSTANTANEOUS AND ENORMOUS – BOOM! Done. A switch flicked: a binary distinction. You were childless, now you are a father. You’re handed the child, and this is it: the moment. That moment.

But how had you felt, then? Tired? Relieved? Concerned about your wife? All of these things, inter alia. And the alia? Did they include an overwhelming, all-consuming, and unconditional love? A love above and beyond all other love, for the miracle you hold so tentatively in your arms? They did not. The alia did not include that. So is the switch broken, then? Is there something wrong with the switch? Is there something wrong with you? Because, where is the tsunami? What happened to that?

And now it’s a week later and you’re home, all three of you. It’s hard work, being a father. Day is night, night is day. Neither means much. And there’s science involved: one corner of the kitchen has been transformed into a laboratory in miniature. You have sterilising equipment, measuring spoons and cups, powders, potions, salts. The parental alchemy of transforming crying into sleep. It’s hard work.

fiction and memoir from NI and Ireland

fiction and memoir from NI and Ireland