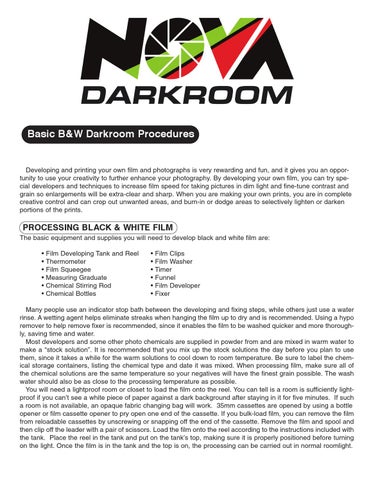 Developing and printing your own film and photographs is very rewarding and fun, and it gives you an opportunity to use your creativity to further enhance your photography. By developing your own film, you can try special developers and techniques to increase film speed for taking pictures in dim light and fine-tune contrast and grain so enlargements will be extra-clear and sharp. When you are making your own prints, you are in complete creative control and can crop out unwanted areas, and burn-in or dodge areas to selectively lighten or darken portions of the prints.

Many people use an indicator stop bath between the developing and fixing steps, while others just use a water rinse. A wetting agent helps eliminate streaks when hanging the film up to dry and is recommended. Using a hypo remover to help remove fixer is recommended, since it enables the film to be washed quicker and more thoroughly, saving time and water. Most developers and some other photo chemicals are supplied in powder from and are mixed in warm water to make a “stock solution”. It is recommended that you mix up the stock solutions the day before you plan to use them, since it takes a while for the warm solutions to cool down to room temperature. Be sure to label the chemical storage containers, listing the chemical type and date it was mixed. When processing film, make sure all of the chemical solutions are the same temperature so your negatives will have the finest grain possible. The wash water should also be as close to the processing temperature as possible. You will need a lightproof room or closet to load the film onto the reel. You can tell is a room is sufficiently lightproof if you can’t see a white piece of paper against a dark background after staying in it for five minutes. If such a room is not available, an opaque fabric changing bag will work. 35mm cassettes are opened by using a bottle opener or film cassette opener to pry open one end of the cassette. If you bulk-load film, you can remove the film from reloadable cassettes by unscrewing or snapping off the end of the cassette. Remove the film and spool and then clip off the leader with a pair of scissors. Load the film onto the reel according to the instructions included with the tank. Place the reel in the tank and put on the tank’s top, making sure it is properly positioned before turning on the light. Once the film is in the tank and the top is on, the processing can be carried out in normal roomlight.

The first step in loading the film into a developing tank is winding it onto a plastic or metal spiral reel. Film reels create gaps between the layers of film through which chemicals can circulate to evenly process the entire roll. Some plastic reels can be adjusted to accept various film widths.

The instructions packed with most black and white films give the developing times for various developers at temperature ranges from 65° to 75° F. The best temperature for most film/developer combinations is 68°, but the other temperatures in this range will also produce good negatives. After the film and reel are loaded into the tank, the chemicals are prepared to the proper working strength. Set your timer to the correct time for the temperature you are using, and you are ready to begin. Pour in the developer through the opening in the tank lid, start the timer and agitate the film according to the instructions supplied with the tank for 30 seconds. Tap the tank bottom on the countertop or sink to dislodge any air bubbles clinging to the film. If the air bubbles are not dislodged, they will prevent developer from acting on the surface of the film beneath them, causing clear, round spots on the negative. How often film is agitated is somewhat a matter of personal preference, but agitating for 5 second every 30 seconds is common. About 15 to 20 seconds before the development time is over, begin draining the developer from the tank. If a stop bath or water rinse is used, pour it in and agitate for 30 seconds. Pour it out and pour in the fixer. Fix the film for 5 to 10 minutes if regular fixer is used, or 2 or 4 minutes if rapid fixer is used. Agitating the film in the fixer step isn’t as important as with developer, but agitating it 5 second every minute will help assure thorough fixing. At the end of the fixing period, pour the used fixer back into the fixer bottle. Be sure to follow the fixer instructions regarding the storage life and capacity of fixer solutions. Using a hypo-removing wash aid will shorten the film washing time and save water. Follow the instructions supplied with the hypo remover. If no hypo remover is used, wash the film in its reel and tank for 20 to 30 minutes or in an efficient film washer, usually for 5 to 10 minutes. After washing, use a wetting agent such as Kodak PhotoFlo to minimize streaks and water spots on the dried film. Hang the film to dry with a film clip on each end in a dust-free area. Use a film squeegee to wipe off excess water.

BLACK &amp; WHITE ENLARGING The equipment and supplies you will need for making prints from black and white negative include: • Enlarger • Print Processing Trays (3) • Easel • Chemical Storage Bottles • Negative Dusting Brush or Canned Air • Photographic Paper • Enlarger Timer • Funnel* • Safelight • Chemical Stirring Rod* • Print Washer • Paper Developer • Measuring Graduate* • Stop Bath • Fixer* *Also used for developing black and white film. The enlarger will be your single most expensive piece of equipment in your darkroom, so it should be chosen with care. When selecting an enlarger, consider the largest print size you will probably make, the large negative size you will probably use and whether you want a condenser enlarger with a drawer for Multigrade or other variable contrast filters or an enlarger with a dichroic lamphouse which has built-in color printing filters.

Many of the chemicals for making black &amp; white prints are sold in powder form. Mix them with warm water the day before you plan on using them so they will have time to cool down to room temperature. Arrange the print trays and pour working-solution developer in the one on the left, stop bath in the middle tray and fixer in the tray on your right. Place the print washer to the right of fixer tray. Begin printing by removing all traces of dust and lint from the negative with a dusting brush or a blast of canned air. Place the negative in the enlargerâ&amp;#x20AC;&amp;#x2122;s negative carrier with the emulsion (dull side) down. With the room lights off, turn on the enlarger lamp to compose and focus the image on the enlarging easel. Have the enlarging lens opened to its widest opening. An enlarging focuser will help you to focus the image sharply, particularly when using a slow enlarging lens. Focusing the image on a scrap piece of photo paper in the easel that is the same weight as the paper you are using will give you the sharpest focus possible. Turn off the enlarger, set the enlarging lens at f8 and place a sheet of photo paper in the easel with the emulsion side up. Use a sheet of cardboard to cover up all but 1/6 of the paper. Turn on the enlarger and expose the paper for 5 seconds and repeat until the whole sheet of paper has been exposed. This test print will consist of six sections, each varying in exposure. The exposures will be 5, 10, 15, 20, 25, 30 seconds. Develop and fix the paper, then turn on the room lights to see which of the test strips has the best exposure. The 5 second strip will be the lightest, the 30 second strip the darkest. Use the exposure time for the best strip as the exposure time for the print. Enlarging lenses usually give the highest resolution when stopped down 2 or 3 f-stops from maximum aperture. Using a lens stopped down to f8 or f11 also results in an exposure time that is convenient to work with and the added depth-of-focus gives better edge-to-edge sharpness.

Most black &amp; white papers are developed for 60 to 90 seconds. For best results, develop for the length of time specified in the instruction sheet packed with the paper. With some papers, the development time can be shortened or lengthened somewhat and the print can be removed from the developer when the image looks right. This is called â&amp;#x20AC;&amp;#x153;developing by inspectionâ&amp;#x20AC;?. Immersing the print in the stop bath for 5 to 10 seconds neutralizes the developer and prevents developer from being carried into the fixer and exhausting it quicker than normal. Fix fiber-base prints for 5 to 10 minutes and resin-coated (RC) prints for 2 minutes. Wash RC prints for 4 minutes and singleweight fiber-based prints for 10 to 25 minutes. A hypo-removing wash aid will shorten the wash time for fiber-base prints substantially and is recommended. Wipe excess water off the prints and dry fiber-base prints in a blotter book, blotter roll or print dryer. RC prints can be air-dried. Photo papers have either a fiber base or a resin-coated base. Fiber-based papers are available in several surfaces and in single or double weight. RC papers have a plastic coating on the back that helps prevent chemicals from being absorbed into the paper. RC prints do not require as much time in the fixer or as much washing as fiber-base papers. RC papers will also air-dry flat and glossy surface RC papers will dry to a glossy finish. Beginning darkroom workers in particular will find it easier to use resin-coated papers than fiber-base papers. Photo papers can be handled only under safelight conditions with room lights off until they have been in the fixer for about 30 seconds. Graded contrast papers are made with a set amount of contrast. A numerical scale ranging from 0 (low contrast) to 5 (high contrast) indicates the contrast range of a package of paper. Grades 2 or 3 are considered average contrast by most printers. Variable contrast papers, such as Ilford Multigrade IV RC, have normal Grade 2 contrast when they are printed without filters. Ilford makes printing filters that give paper eleven different contrasts in half-step graduations from No.0 to No. 5. The main advantage of variable contrast paper is that one pack of paper can do the work of several papers in different contrast, letting you keep your paper inventory to a minimum.

A contact printer has a clear glass or plastic panel that holds negatives flat against the sheet of photo paper. A contact sheet is an excellent way to view the results of a roll of film without making a lot of small prints.

This booklet has been made for you by the experts at The Imaging Warehouse who have an incredible history of knowledge in the creation of traditional darkroom prints. Go online to learn more: www.theimagingwarehouse.com 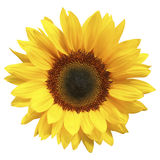