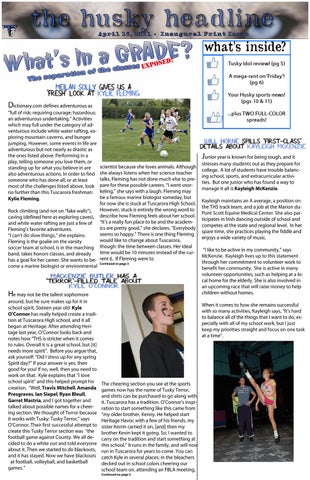 Carol won the state competition on March 18, 2011 by reciting the poems “Agoraphobia” by Linda Pastan, “Strange Meeting” by Wilfred Owen, and “When I Have Fears That I May Cease to Be” by John Keats. At the regional competition she recited “Strange Meeting” by Wilfred Owen as well as “Not Weaving But Drowning” by Stevie Smith. Before any of that, Carol participated in the school-wide competition where she recited “Not Weaving But Drowning” by Stevie Smith. Carol says that she “writes poetry only when I‟m stressed, rather than for „funsies‟”. Carol is off to the national competition which will happen in DC on April 27th.

Photo Credit: “Margaret” These are a few of the pills Margaret uses to treat her Lyme Disease. "I have to take 44 pills and 5 liquid/powder medications every day," she says.

That Was Then, This is Now - Advice Column Submissions! Submit your questions now for the Tuscarora High School advice column! You can e-mail questions to thshuskyheadline@gmail.com or drop them in the box outside of Room 400. Don’t forget: that was then, this is now. All you need is some advice and you’ll be able to move on with your life. Guidelines: You can submit questions anonymously. * Keep content appropriate. * We’ll publish 2 letters per edition. The Husky Headline serves as an open forum of public expression for the students and teachers of Tuscarora High School. We are committed to delivering relevant, accurate news - which means we want to hear from you! Opinions may be expressed in letters to the editor and can be sent to the staff at THSHuskyHeadline@gmail.com. Please include your name and class standing in all letters to the editor.

Tuscarora is Trying to Outrun Diabetes By Mackenzie Butler

It‟s Not Hard to Teach Huskies to Read

This or That!? with Dagney Palmer Mr. O‟Rourke, one of Tuscarora‟s assistant principals, tells us his favorites: Coke or Pepsi? Summer or winter? Science or history? Past or future? Rain or snow? Football or basketball? Leading or following? Mac or PC? East Coast or West? Star Wars or Star Trek? Ketchup or mustard? Text or call?

Dagney Palmer / Husky Headline Students and their families participated in a push-up contest to test their level of fitness and endurance at the THS Health Fair.

These four-year old kids are at Head Start for 4 hours a day MondayThursday. They learn things like sharing with others as well as all the social skills that they will need for kindergarten.

These kids learn critical skills such as interacting with others, as well as problem solving skills that they will need as they grow.

As Bright as a Laser Pointer By Danny Sedlazek

Destruction Through Capital By Danny Sedlazek

Beastly Lives Up to its Name

Red Riding Hood - Don‟t Even See It in the Hood

Rocking The Cradle: What's Up With Lacrosse?

With The Start of Spring Comes The Starting of Track Season By: Forrest Langhorne

How does the NFL really make itâ&#x20AC;&#x;s money? By: Michael Neranztis

Even the teachers were getting into the spirit! Dr. Kagan and Ms. Smingler show their pride for Tuscarora on Fake an Injury Day.

Sophomores show their spirit by wearing all black for the pep rally, but school comes first for these dedicated 10th graders. “Class of 2013 will make you scream!” Wallace Teska said.

Eli Reid and Matt Busbee look quite dapper as they let loose their inner nerd on Nerd Day.

The class of 2014 show their spirit in white. As the most numerous class at Tuscarora this year, they know they have go all out to pep up the school.

The class of 2012 rules the school as the first graduating class of Tuscarora High School. “Juniors represent!” was a popular exclamation from the spirit-filled 11th graders. The first edition of the paper ever published.

The first edition of the paper ever published.