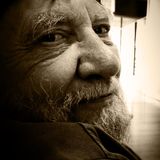 Andrew Rawlinson was a war baby (b.1943) and lived in 17 different places by the time he was six.

He added philosophy and Indian traditions to rock’n’roll, jazz and literature. He was a scholar at Cambridge and did a Ph.D on the Lotus Sutra at the University of Lancaster. He taught Buddhism for 20 years and put on a course on Altered States of Consciousness at Berkeley and Santa Barbara. He wrote a book on Western teachers in Eastern traditions.

He has four children and eight grandchildren. And when he lies next to his wife – his companion for 46 years – he knows there’s nothing else.