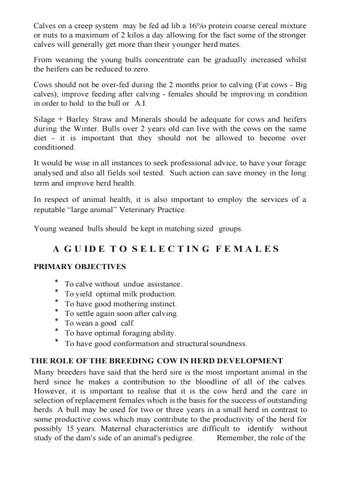 Calves on a creep system may be fed ad lib a 16°/o protein coarse cereal mixture or nuts to a maximum of 2 kilos a day allowing for the fact some of the stronger calves will generally get more than their younger herd mates. From weaning the young bulls concentrate can be gradually increased whilst the heifers can be reduced to zero. Cows should not be over-fed during the 2 months prior to calving (Fat cows - Big calves); improve feeding after calving - females should be improving in condition in order to hold to the bull or A.I. Silage + Barley Straw and Minerals should be adequate for cows and heifers during the Winter. Bulls over 2 years old can live with the cows on the same diet - it is important that they should not be allowed to become over conditioned. It would be wise in all instances to seek professional advice, to have your forage analysed and also all fields soil tested. Such action can save money in the long term and improve herd health. In respect of animal health, it is also important to employ the services of a reputable “large animal” Veterinary Practice. Young weaned bulls should be kept in matching sized groups.

To calve without undue assistance. To yield optimal milk production. To have good mothering instinct. To settle again soon after calving. To wean a good calf. To have optimal foraging ability. To have good conformation and structural soundness.

THE ROLE OF THE BREEDING COW IN HERD DEVELOPMENT Many breeders have said that the herd sire is the most important animal in the herd since he makes a contribution to the bloodline of all of the calves. However, it is important to realise that it is the cow herd and the care in selection of replacement females which is the basis for the success of outstanding herds. A bull may be used for two or three years in a small herd in contrast to some productive cows which may contribute to the productivity of the herd for possibly 15 years. Maternal characteristics are difficult to identify without study of the dam's side of an animal's pedigree. Remember, the role of the