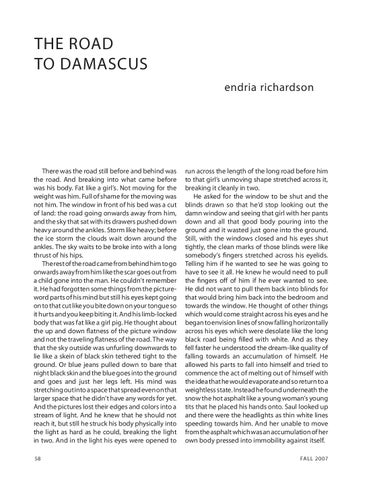 THE ROAD TO DAMASCUS

There was the road still before and behind was the road. And breaking into what came before was his body. Fat like a girl’s. Not moving for the weight was him. Full of shame for the moving was not him. The window in front of his bed was a cut of land: the road going onwards away from him, and the sky that sat with its drawers pushed down heavy around the ankles. Storm like heavy; before the ice storm the clouds wait down around the ankles. The sky waits to be broke into with a long thrust of his hips. The rest of the road came from behind him to go onwards away from him like the scar goes out from a child gone into the man. He couldn’t remember it. He had forgotten some things from the pictureword parts of his mind but still his eyes kept going on to that cut like you bite down on your tongue so it hurts and you keep biting it. And his limb-locked body that was fat like a girl pig. He thought about the up and down flatness of the picture window and not the traveling flatness of the road. The way that the sky outside was unfurling downwards to lie like a skein of black skin tethered tight to the ground. Or blue jeans pulled down to bare that night black skin and the blue goes into the ground and goes and just her legs left. His mind was stretching out into a space that spread even on that larger space that he didn’t have any words for yet. And the pictures lost their edges and colors into a stream of light. And he knew that he should not reach it, but still he struck his body physically into the light as hard as he could, breaking the light in two. And in the light his eyes were opened to 58

run across the length of the long road before him to that girl’s unmoving shape stretched across it, breaking it cleanly in two. He asked for the window to be shut and the blinds drawn so that he’d stop looking out the damn window and seeing that girl with her pants down and all that good body pouring into the ground and it wasted just gone into the ground. Still, with the windows closed and his eyes shut tightly, the clean marks of those blinds were like somebody’s fingers stretched across his eyelids. Telling him if he wanted to see he was going to have to see it all. He knew he would need to pull the fingers off of him if he ever wanted to see. He did not want to pull them back into blinds for that would bring him back into the bedroom and towards the window. He thought of other things which would come straight across his eyes and he began to envision lines of snow falling horizontally across his eyes which were desolate like the long black road being filled with white. And as they fell faster he understood the dream-like quality of falling towards an accumulation of himself. He allowed his parts to fall into himself and tried to commence the act of melting out of himself with the idea that he would evaporate and so return to a weightless state. Instead he found underneath the snow the hot asphalt like a young woman’s young tits that he placed his hands onto. Saul looked up and there were the headlights as thin white lines speeding towards him. And her unable to move from the asphalt which was an accumulation of her own body pressed into immobility against itself. fall 2007 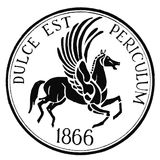