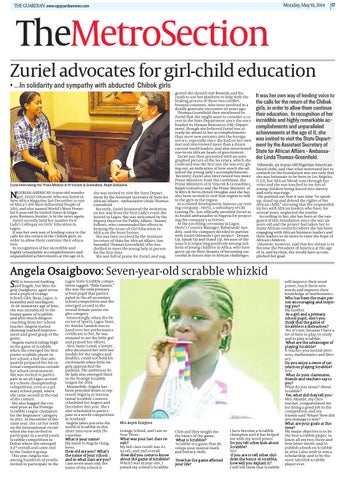 Zuriel interviewing the Prime Minister of St Vincent & Grenadines, Ralph Gonsalves IGERIAN-AMERICAN 11-year-old wonder N girl, Zuriel Oduwole, who was listed in New Africa Magazine last December as one of Africa’s 100 Most Influential People of 2013, and also named World’s Most Powerful 11-year-old by United States & Singapore Business Insider, is in the news again. Zuriel recently held her maiden First Lady’s Colloquy on Girls’ Education in Lagos. It was her own way of lending voice to the calls for the return of the Chibok girls, in order to allow them continue their education. In recognition of her incredible and highly remarkable accomplishments and unparalleled achievements at the age of 11,

gested she should visit Rwanda and Burundi to use her platform to help with the healing process of those two conflictbruised countries, who were involved in a deadly genocide encounter 20 years ago. Thomas-Greenfield then mentioned to Zuriel that she might want to consider a career in the State Department since she once headed its Human Resources (HR) Department, though she believed Zuriel was already far ahead in her accomplishments than most new entrants into the foreign service, especially since she had on her own met and interviewed more than a dozen current world leaders, and also interviewed one-in-six African heads of government. Zuriel was then presented with an autographed picture of the Secretary, which she confessed was the first one she was ever giving out, an indication of how much she admired the young lady’s accomplishments. Recently, Zuriel also interviewed two more Prime Ministers from the Caribbean- the Prime Ministers of St Vincent & Grenadines, Ralph Gonsalves and the Prime Minister of St Kitts & Nevis,Denzil Douglas and she has also been invited to visit that region to talk to the girls in the region. In a related development, famous car renting company – Hertz, a subsidiary of C&I Leasing Plc., has officially unveiled Zuriel as its brand ambassador in Nigeria for projecting the company’s activities. At the unveiling ceremony in Lagos, Hertz’s Country Manager, Babatunde Ayodele, said the company decided to partner with Zuriel Oduwole’s pet project – Dream Up, Speak Up and Stand Up, because of the ways it is impacting positively among millions of young children in Africa, who have given up on their dreams of becoming successful in future due to African challenges.

It was her own way of lending voice to the calls for the return of the Chibok girls, in order to allow them continue their education. In recognition of her incredible and highly remarkable accomplishments and unparalleled achievements at the age of 11, she was invited to visit the State Department by the Assistant Secretary of State for African Affairs - Ambassador Linda Thomas-Greenfield. Oduwole, an 11-year old Nigerian Americanbased child, said that what motivated her to embark on the foundation was not only that she was fortunate to be born in Los Angeles, U.S.A, but African blood runs through her veins and she was touched to see lots of young children being forced into slavery and early marriage. She pointed out that it was time “to speak up, stand up and defend the rights of the African child,” stressing that the responsibility lies with African leaders who have, for several years, neglected the youths. According to her, she has been at the vanguard of this foundation since she was six years old and the project had taken her to many African countries where she has been engaging with African business leaders and their leaders to do more to raise the hope of African children. Oduwole, however, said that her dream is to become the President of America at the age of 19, and by then, she would have accomplished her goal.

Angela Osaigbovo: Seven-year-old scrabble whizkid is innocent-looking SgelaHE and fragile, but Miss AnOsaigbovo, aged seven and a pupil of Grange School, GRA, Ikeja, Lagos, is beautiful and intelligent. At an immature age of four, she was introduced to the brainy game of Scrabble, and after much diligent coaching from her schoolteacher, Angela started showing marked improvement and good grasp of the game. Angela started riding high in the game of Scrabble when she emerged the best junior scrabble player in her school, a feat that adequately prepared her for external competitions outside her school environment. She was invited to participate in an all Lagos secondary schools championship competition, even as a primary school pupil, where she came second at the end of the contest. She also bagged the coveted prize as the Protégé Scrabble League champion for the beginners’ category in 2013. In December of the same year, she cut her teeth on the International circuit when she was invited to participate in a world youth Scrabble competition in Dubai where she emerged 114th overall and came 2nd in the Under-8 group. This year, Angela was among hundreds of youths invited to participate in the

Lagos State Scrabble competition tagged: “Ibile Games.” She was the only primary school pupil that participated in the all secondary school competition and she emerged second in the overall female junior singles category. Interestingly, when the Director of Sports, Lagos State, Dr. Kweku Tandoh was to hand over her performance certificate to her, he was stunned to see the little girl and praised her efforts. Also, Sanjo Lawal, a lawyer, who decorated her with her medals for the singles and doubles, could not hold his excitement when little Angela approached the podium. The ambitious little lady also emerged third in the Protégé Scrabble League for 2014. Meanwhile, Angela has been penciled down to represent Nigeria in International Scrabble Contests scheduled for August and December this year. She’s also scheduled to participate in a world competition in Scotland. Angela takes you into the world of Scrabble in this short interview with The Guardian. What is your name? My name is Angela Osaigbovo. How old are you? What’s the name of your school and in what class are you? I am seven years old; the name of my school is

Miss Angela Osaigbovo Grange School, and I am in Year Three. What was your last class result? My last class result was A+, 92.14%, and 2nd overall. How did you come to know about the game of Scrabble? When I was in year one, I joined my school’s Scrabble

Club and they taught me the basics of the game. What is Scrabble? Scrabble is a game that develops your mental math and literacy skills. How has the game affected your life?

I have become a Scrabble champion and it has helped me with my word power. Do you tell other kids about Scrabble? Yes! If you are to tell other children the basics of scrabble, how will you explain it? I will tell them that Scrabble

will improve their word power, teach them new words and improve their knowledge of mathematics. Who has been the main person encouraging and inspiring you? My mother. As a girl and a primary school pupil, don’t you think that the game of Scrabble is a distraction? No, it’s not, because I have a lot of time to play, to study and to play scrabble. What are the advantages of playing Scrabble? It teaches you mental alertness, mathematics and literacy. Do you enjoy a sense of satisfaction playing Scrabble? Yes! What do your classmates, friends and teachers say to you? What do you mean? About Scrabble? Yes, what did they tell you? Mrs. Akande, my class teacher, congratulated me for doing a good job in the competition, and my friends said ‘Whao! How did you manage to win?’ What are your goals at this time? My major objective is to be the best scrabble player, to know all my two, three and four letter words, and to publish a book on Scrabble in 2014. I also wish to win a scholarship, and to be the most talented scrabble player ever. 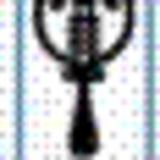