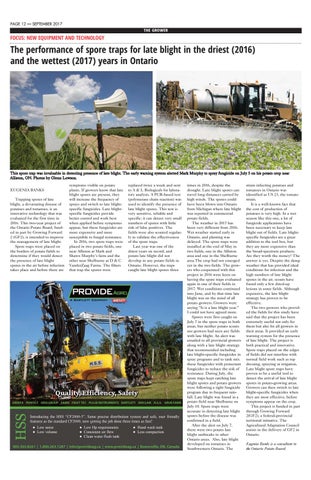 This spore trap was invaluable in detecting presence of late blight. The early warning system alerted Mark Murphy to spray fungicide on July 5 on his potato crop near Alliston, ON. Photos by Glenn Lowson. EUGENIA BANKS Trapping spores of late blight, a devastating disease of potatoes and tomatoes, is an innovative technology that was evaluated for the first time in 2016. This two-year project of the Ontario Potato Board, funded in part by Growing Forward 2 (GF2), is intended to improve the management of late blight. Spore traps were placed on the borders of potato fields to determine if they would detect the presence of late blight spores in the air before infection takes place and before there are

symptoms visible on potato plants. If growers know that late blight spores are present, they will increase the frequency of sprays and switch to late blightspecific fungicides. Late blightspecific fungicides provide better control and work best when applied before symptoms appear, but these fungicides are more expensive and more susceptible to fungal resistance. In 2016, two spore traps were placed in two potato fields, one near Alliston at Mark and Shawn Murphy’s farm and the other near Shelburne at D &amp; C VanderZaag Farms. The filters that trap the spores were

replaced twice a week and sent to A &amp; L Biologicals for laboratory analysis. A PCR-based test (polymerase chain reaction) was used to identify the presence of late blight spores. This test is very sensitive, reliable and specific: it can detect very small numbers of spores with little risk of false positives. The fields were also scouted regularly to validate the effectiveness of the spore traps. Last year was one of the driest years on record, and potato late blight did not develop in any potato fields in Ontario. However, the traps caught late blight spores three

times in 2016, despite the drought. Late blight spores can travel long distances carried by high winds. The spores could have been blown into Ontario from Michigan where late blight was reported in commercial potato fields. The weather in 2017 has been very different from 2016. Wet weather started early in Ontario, and planting was delayed. The spore traps were installed at the end of May in two fields, one in the Alliston area and one in the Shelburne area.The crop had not emerged yet in the two fields. The growers who cooperated with this project in 2016 were keen on having the spore traps evaluated again in one of their fields in 2017. Wet conditions continued into June, and by that time late blight was on the mind of all potato growers. Growers were saying “It is a late blight year.” I could not have agreed more. Spores were first caught on July 7 in the spore traps in both areas, but neither potato scouts nor growers had seen any fields with late blight. An alert was emailed to all provincial growers along with a late blight strategy that recommended including late blight-specific fungicides in spray programs and to tank mix these fungicides with protectant fungicides to reduce the risk of resistance. During July, the spore traps kept catching late blight spores and potato growers were following a tight fungicide program due to frequent rainfall. Late blight was found in a potato field near Shelburne on July 18. Spore traps were accurate in detecting late blight spores before the disease was confirmed in a field. After the alert on July 7, there were two potato late blight outbreaks in other Ontario areas. Also, late blight developed on tomatoes in Southwestern Ontario. The

strain infecting potatoes and tomatoes in Ontario was identified as US 23, the tomato strain. It is a well-known fact that the cost of production of potatoes is very high. In a wet season like this one, a lot of fungicide applications have been necessary to keep late blight out of fields. Late blightspecific fungicides are a great addition to the tool box, but they are more expensive than the broad-spectrum products. Are they worth the money? The answer is yes. Despite the damp weather that has provided ideal conditions for infection and the high numbers of late blight spores in the air, scouts have found only a few dried-up lesions in some fields. Although expensive, the late blight strategy has proven to be effective. The two growers who provided the fields for this study have said that the project has been extremely useful not only for them but also for all growers in their areas. It provided an early warning system for the presence of late blight. The project is both practical and innovative. Spore traps placed on the edges of fields did not interfere with normal field work such as top dressing, spraying or irrigation. Late blight spore traps have proven to be a useful tool to detect the arrival of late blight spores in potato-growing areas. Growers can then switch to late blight-specific fungicides when they are most effective, before symptoms appear on the crop. This project is funded in part through Growing Forward 2(GF2), a federal-provincial territorial initiative. The Agricultural Adaptation Council assists in the delivery of GF2 in Ontario. Eugenia Banks is a consultant to the Ontario Potato Board. 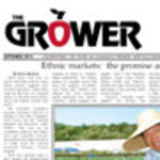