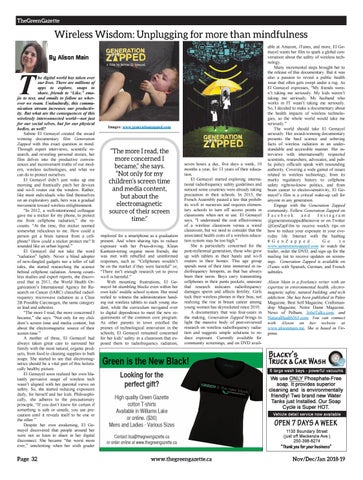 he digital world has taken over our lives. There are millions of apps to explore, snaps to share, friends to ―Like,‖ emojis to text, and emails to follow us wherever we roam. Undoubtedly, this communication stream increases our productivity. But what are the consequences of this wirelessly interconnected world—not just for our social selves, but for our physical bodies, as well? Sabine El Gemayel created the award winning documentary film Generation Zapped with this exact question in mind. Through expert interviews, scientific research, and revealing personal stories, her film delves into the productive conveniences and inconvenient truths of our modern, wireless technologies, and what we can do to protect ourselves. El Gemayel didn‘t just wake up one morning and frantically pitch her devices and wi-fi router out the window. Rather, like most individuals who find themselves on an exploratory path, hers was a gradual movement toward wireless enlightenment. ―In 2012, a well-intentioned colleague gave me a sticker for my phone, to protect me from cellphone radiation,‖ she recounts. ―At the time, this sticker seemed somewhat ridiculous to me. How could a person get a brain tumour from a cellphone? How could a sticker protect me? It sounded like an urban legend.‖ El Gemayel did not take the word ―radiation‖ lightly. Never a blind adopter of new-fangled gadgets nor a teller of tall tales, she started researching the science behind cellphone radiation. Among countless studies and expert reports, she discovered that in 2011, the World Health Organization‘s International Agency for Research on Cancer (IARC) classified radiofrequency microwave radiation as a Class 2B Possible Carcinogen, the same category as lead and asbestos. ―The more I read, the more concerned I became,‖ she says. ―Not only for my children‘s screen time and media content, but about the electromagnetic source of their screen time.‖ A mother of three, El Gemayel had always taken great care to surround her family with the most natural, organic products, from food to cleaning supplies to bath soaps. She started to see that electromagnetics should be a vital part of this holistically healthy picture. El Gemayel soon realized her own blatantly pervasive usage of wireless tech wasn‘t aligned with her parental views on safety. So, she started reducing exposures daily, for herself and her kids. Philosophically, she adheres to the precautionary principle, ―If you don‘t know for certain if something is safe or unsafe, you use precaution until it reveals itself to be one or the other.‖ Despite her own awakening, El Gemayel discovered that people around her were not so keen to share in her digital disconnect. She became ―the worst mom ever,‖ unrelenting when her sixth grader

implored for a smartphone as a graduation present. And when sharing tips to reduce exposure with her Prius-driving, Klean Kanteen-toting organic mom friends, she was met with rebuffed and uninformed responses, such as: ―Cellphones wouldn‘t be on the market if they were harmful‖ or, ―There isn‘t enough research yet to prove wi-fi is harmful.‖ With mounting frustrations, El Gemayel hit stumbling blocks even within her own kids‘ middle school system. Her mind reeled to witness the administration handing out wireless tablets to each young student, while the curriculum navigated over to digital dependence to meet the new requirements of the common core program. As other parents in town extolled the praises of technological innovation in the schools, El Gemayel remained concerned for her kids‘ safety in a classroom that exposed them to radiofrequency radiation,

seven hours a day, five days a week, 10 months a year, for 13 years of their education. El Gemayel started exploring international radiofrequency safety guidelines and noticed some countries were already taking precaution in their schools. In 2015, the French Assembly passed a law that prohibits wi-fi in nurseries and requires elementary schools to turn off access points in classrooms when not in use. El Gemayel says, ―I understand the cost effectiveness of a wireless classroom versus a wired classroom, but we need to consider that the associated health costs of a wireless education system may be too high.‖ She is particularly concerned for the post-millennial generation, those who grew up with tablets in their hands and wi-fi routers in their homes. This age group spends most of their time immersed in radiofrequency hotspots, as that has always been their norm. Boys carry transmitting cellphones in their pants pockets, unaware that research indicates radiofrequency damages sperm and affects fertility. Girls tuck their wireless phones in their bras, not realizing the rise in breast cancer among young women has skyrocketed since 2010. A documentary that was four-years in the making, Generation Zapped brings to light the massive body of peer-reviewed research on wireless radiofrequency radiation and suggests simple solutions to reduce exposure. Currently available for community screenings, and on DVD avail-

able at Amazon, iTunes, and more, El Gemayel wants her film to spark a global conversation about the safety of wireless technology. Many incremental steps brought her to the release of this documentary. But it was also a passion to reveal a public health issue that often gets swept under a rug. As El Gemayel expresses, ―My friends weren‘t taking me seriously. My kids weren‘t taking me seriously. My husband who works in IT wasn‘t taking me seriously. So, I decided to make a documentary about the health impacts of wireless technologies, so the whole world would take me seriously.‖ The world should take El Gemayel seriously. Her award-winning documentary presents the hard science and sobering facts of wireless radiation in an understandable and accessible manner. Her interviews with internationally respected scientists, researchers, advocates, and public policy officials speak with resounding authority. Covering a wide gamut of issues related to wireless technology, from its murky regulatory history to cellphone safety right-to-know politics, and from brain cancer to electro-sensitivity, El Gemayel‘s film is a critical wake-up call for anyone in any generation. Engage with the Generation Zapped community. Follow Generation Zapped on Facebook and Instagram @generationzappedthemovie or on Twitter @GenZapFilm to receive weekly tips on how to reduce your exposure in your everyday life. Interact with the hashtag # G e n Z a p p e d . G o t o www.generationzapped.com to watch the trailer, order the DVD, and sign up for the mailing list to receive updates on screenings. Generation Zapped is available on iTunes with Spanish, German, and French subtitles. Alison Main is a freelance writer with an expertise in environmental health, electromagnetic safety, natural building, and tech addiction. She has been published in Paleo Magazine, Best Self Magazine, Craftsmanship Magazine, Notre Dame Magazine, News of Pelham, JolieTalks.com, and NaturalHealth365.com. You can connect with Alison on her website at www.alisonmain.me. She is based in Virginia.