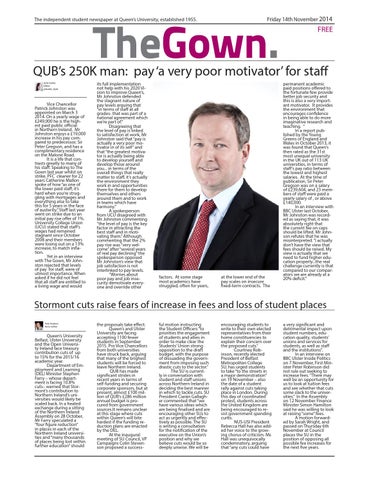 Vice Chancellor Patrick Johnston was appointed on March 3 2014. On a yearly wage of £249,000 he is the highest paid public official in Northern Ireland. Mr Johnston enjoys a £19,000 increase in his pay compared to predecessor, Sir Peter Gregson, and has a complimentary residence on the Malone Road. It is a life that contrasts greatly to many of his staff. Speaking to The Gown last year whilst on strike, PFC cleaner for 22 years Catherine Mallon spoke of how “as one of the lower paid staff, it’s hard when you’re struggling with mortgages and everything else to take this for 5 years in the face of austerity.” Staff last year went on strike due to an initial pay rise offer of 1%. University College Union (UCU) stated that staff’s wages had remained stagnant since October 2008 and their members were losing out on a 13% increase, to match inflation. Yet in an interview with The Gown, Mr Johnston rejected that levels of pay for staff, were of utmost importance. When asked if he did not feel that all staff are entitled to a living wage and would

its full implementation not help with his 2020 Vision to improve Queen’s, Mr Johnston defended the stagnant nature of pay levels arguing that “in terms of staff at all grades- that was part of a national agreement which we’re part of.” Disagreeing that the level of pay is linked to satisfaction at work, Mr Johnston said that “pay is actually a very poor motivator in of its self” and that “the greatest motivator is actually being able to develop yourself and develop those around you... in terms of the overall things that really matter to staff, it’s actually the environment they work in and opportunities there for them to develop themselves and others around them and to work in teams which have harmony.” A spokesperson from UCU disagreed with Mr Johnston commenting “the level of pay is the key factor in attracting the best staff and in motivating them.” Although commenting that the 2% pay rise was “very welcome” after “several years of real pay declining” the spokesperson opposed Mr Johnston’s view that job satisfaction is not interlinked to pay levels. “Worries about poor pay and job insecurity demotivate everyone and override other

factors. At some stage most academics have struggled, often for years,

at the lower end of the pay scales on insecure fixed-term contracts. The

permanent academic paid positions offered to the fortunate few provide better job security and this is also a very important motivator. It provides the environment that encourages confidence in being able to do more imaginative research and teaching. ” In a report published by the Young Greens of England and Wales in October 2013, it was found that Queen’s then rated as the 31st most unequal university in the UK out of 113 UK universities, in terms of staff’s pay ratio between the lowest and highest salaries. At the time of publication, Sir Peter Gregson was on a salary of £239,604, and 23 members of staff were paid a yearly salary of , or above £140,000. In an interview with BBC Ulster last October, Mr Johnston was recorded as saying that, it was absolutely right that the current fee on caps should be lifted. Mr Johnson refutes that he was misinterpreted. “I actually don’t have the view that fees should be raised. My view is actually that we need to fund higher education properly...the real challenge currently is that compared to our comparators we are already at a 20% deficit.”

Queen’s University Belfast, Ulster University and the Open University Ireland face treasury contribution cuts of up to 15% for the 2015/16 academic year. Department of Employment and Learning (DEL) Minister Stephen Farry – whose department is facing 10.8% cuts– warned that Stormont’s contribution to Northern Ireland’s universities would likely be scaled back. In a heated exchange during a sitting of the Northern Ireland Assembly on 28 October, Mr Farry speculated a “four figure reduction” in places in each of the Northern Ireland universities and “many thousands of places being lost within further education” should

the proposals take effect. Queen’s and Ulster University are facing accepting 1100 fewer students in September 2015. Pro Vice Chancellors from both universities have struck back, arguing that many of the brighest students will be forced to leave Northern Ireland. QUB has made significant strides in recent years in terms of self-funding and securing corporate sponsors, but at present, almost £100 million of QUB’s £286 million annual budget is procured from government sources.It remains unclear at this stage where cuts within Queen’s will bite hardest if the funding reduction plans are enacted by the DEL. At the inaugural meeting of SU Council, VP Campaigns Colin Stevenson proposed a success-

ful motion instructing the Student Officers “to priorities the engagement of students and allies in order to make clear the Students’ Union strong opposition to the draft budget, with the purpose of dissuading the government from imposing such drastic cuts to the sector.” The SU is currently in conversation with student and staff unions across Northern Ireland in deciding the best manner in which to tackle cuts. SU President Ciarán Gallagher commented that “we have various ideas which are being finalised and are encouraging other SUs to act as urgently and effectively as possible. The SU is writing a consultation for the notification of the executive on the Union’s position and why we believe cuts would be so deeply unwise. We will be

encouraging students to write to their own elected representatives from their home constituencies to explain their concern over the proposed cuts.” Courtney Robinson, recently elected President of Belfast Metropolitan College SU, has urged students to take “to the streets in a major demonstration” on 19 November – also the date of a student rally against cuts taking place in London. During this day of coordinated protest, students across the United Kingdom are being encouraged to resist government spending curbs. NUS-USI President Rebecca Hall has also added her voice to the growing chorus of criticism. Ms Hall was unequivocally condemnatory, arguing that “any cuts could have

a very significant and detrimental impact upon student numbers, education quality, students’ unions and services for students, as well as staff and the institutions”. In an interview on BBC Ulster Inside Politics on 7 November, First Minister Peter Robinson did not rule out seeking to increase fees. “There may well be an opportunity for us to look at tuition fees and see whether that cuts some slack to the universities.” In the Assembly on 12 November Finance Minister Simon Hamilton said he was willing to look at raising “some” fees. A motion forwarded by Sarah Wright, and passed on Thursday 6th November at Council places the SU in the position of opposing all possible fee increases for the next five years.