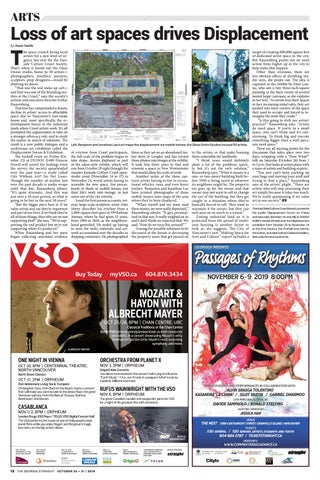 he space crunch facing local artists hit a new level of urgency last year for the Eastside Culture Crawl Society. That’s when it found out the Glass Onion studio, home to 30 artists— photographers, jewellers, painters, sculptors, prop designers—would be shutting its doors. “That was the real wake-up call— and that was one of the founding studios at the Crawl,” says the society’s artistic and executive director Esther Rausenberg. That loss has compounded a drastic decline in artists’ access to affordable space due to Vancouver’s real-estate boom and, more specifically, the redevelopment frenzy in the industrial lands where Crawl artists work. It’s all prompted the organization to take on a stronger advocacy role, and to study the matter in search of solutions. The result is a new public dialogue and a multivenue art exhibition called the Displacement Forum &amp; Exhibition. The kickoff event on Friday (October 25) at DUDOC (1489 Frances Street) will unveil the findings from the survey the society spearheaded over the past year—a study called City Without Art? No Net Loss+. Though the number of studios lost over the past decade is under wraps until that day, Rausenberg allows: “It’s quite dramatic. And this was just over a 10-year period, so what is going to be lost in the next 10 years? “But the bigger piece here is: if we value artists and say they’re important and part of our lives, if we think they’re all of those things, then why are we not supporting that?” she says. “We’re supporting the end product but we’re not supporting where it’s produced.” When Rausenberg and her team began collecting anecdotal evidence

of eviction from Crawl participants, the full scale of the problem began to take shape. Stories displayed as part of the salon-style exhibit, which will run from October 29 right through the massive Eastside Culture Crawl openstudio event (November 14 to 17) to November 24, reveal artists having to scramble for new space, live precariously in sheds or mobile homes, put their life’s work into storage, or just move out of the city entirely. Amid the first-person accounts, veteran large-scale-sculpture artist Alan Storey describes his eviction from a 2,800-square-foot space at 339 Railway Avenue, where he had spent 32 years, from 1984 to 2016, as the neighbourhood gentrified. He ended up having to store the tools, materials, and artwork accumulated over the decades in shipping containers. He photographed

them as they sat on an abandoned turkey farm in Langley and has turned those photos into images at the exhibit. It took him three years to find and renovate a space in New Westminster that would allow his scale of work. Another series at the show captures artists having to live in recreational vehicles, vans, and even horse trailers. Benjamin and Jonathan Lee have printed photographs of these mobile homes onto maps of the area where they’ve been displaced. “When myself and my team read these stories, we were really depressed,” Rausenberg admits. “It gets personalized in that way. It really weighed on us and I don’t think we expected that. We said, ‘How do we turn this around?’ ” Among the possible solutions to be discussed at the forum is decreasing the property taxes that get passed on

ONE NIGHT IN VIENNA

Parc Retirement Living Tea &amp; Trumpets Christopher Gaze, from Bard on the Beach, hosts a concert that will make you want to take to the dance floor: the great Viennese waltzes, from the likes of Strauss, Brahms, Beethoven and Mozart.

OriginO Kids Concerts Two aliens have landed in the concert hall trying to influence “Earth Music.” A fun, sci-fi twist in a program full of music by Copland, Williams and more.

RUFUS WAINWRIGHT WITH THE VSO

The great Canadian vocalist and songwriter joins the VSO for a night of his greatest hits with orchestra.

London Drugs VSO Pops / TELUS VSO Digital Concert Hall The VSO performs the music of one of Hollywood’s most iconic films while you enjoy Bogart and Bergman’s tragic love story on the big screen above. RUFUS WAINWRIGHT

to the artists, or that make housing them untenable for landlords. “I think taxes would definitely abate a lot of the problems quickly, but it’s not the only solution,” Rausenberg says. “What it means is a one- or two-storey building built before 1950 is being taxed at whatever its neighbour might be. The property tax goes up for the owner and that owner may not want to sell or change the use of the building, but they get caught in a situation where they’re basically forced to sell. They want to maintain it for artists, but they can only pass on so much to a tenant.” Zoning industrial land so it is protected from the spread of multiunit housing is another factor to look at, she suggests. The City of Vancouver’s new “Making Space for Arts and Culture” report includes a

target of creating 800,000 square feet of dedicated artist space in the city. But Rausenberg points out we need action from higher up in the city to help make that happen. Other than evictions, there are less obvious effects of shrinking studio sizes, she points out. The idea is captured in the exhibit by Dzee Louise, who sets a tiny three-inch-square painting in the back corner of several nested larger canvases; as she explains in her text, “As artists lose their spaces or face increasing rental rates, they are pushed into mere corners of the space they used to occupy and forced to reimagine the work they create.” “Is this going to shift our artists’ practice?” Rausenberg asks. “Artists do need space. If you’re in a small space, you can’t think and it’s constraining. To think big and execute something bigger than a wall piece, you need space.” These are all starting points for the discussion that takes place over two days, wrapping with a “Now What?” talk on Saturday (October 26) from 1 to 3 p.m. that looks at action plans with a team of artists and building experts. “You just can’t keep packing up your bags and moving your stuff and trying to find a place,” Rausenberg says of the artists’ plight. “There are artists who will stop practising their art simply because it takes too much. We’re really questioning if we value art in our society.” g The East Side Culture Crawl Society presents the public Displacement Forum on Friday and Saturday (October 25 and 26) at DUDOC (1489 Frances Street) and the Displacement exhibition from October 29 to November 24 at the Arts Factory, the Firehall Arts Centre, the Cultch, and Alternative Creations Gallery. See culturecrawl.ca/events. 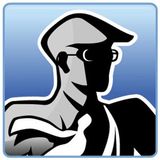