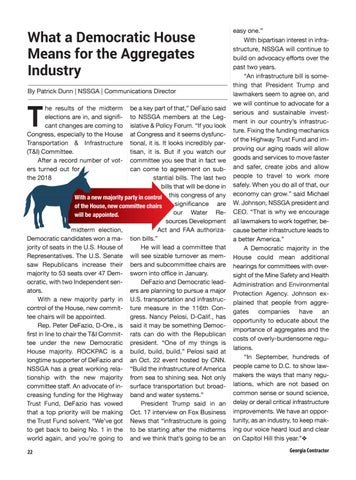 What a Democratic House Means for the Aggregates Industry By Patrick Dunn | NSSGA | Communications Director he results of the midterm elections are in, and significant changes are coming to Congress, especially to the House Transportation & Infrastructure (T&I) Committee. After a record number of voters turned out for the 2018

be a key part of that,” DeFazio said to NSSGA members at the Legislative & Policy Forum. “If you look at Congress and it seems dysfunctional, it is. It looks incredibly partisan, it is. But if you watch our committee you see that in fact we can come to agreement on substantial bills. The last two bills that will be done in With a new majority party in control this congress of any significance are of the House, new committee chairs our Water Rewill be appointed. sources Development Act and FAA authorizamidterm election, Democratic candidates won a ma- tion bills.” He will lead a committee that jority of seats in the U.S. House of Representatives. The U.S. Senate will see sizable turnover as memsaw Republicans increase their bers and subcommittee chairs are majority to 53 seats over 47 Dem- sworn into office in January. DeFazio and Democratic leadocratic, with two Independent seners are planning to pursue a major ators. With a new majority party in U.S. transportation and infrastruccontrol of the House, new commit- ture measure in the 116th Congress. Nancy Pelosi, D-Calif., has tee chairs will be appointed. Rep. Peter DeFazio, D-Ore., is said it may be something Democfirst in line to chair the T&I Commit- rats can do with the Republican tee under the new Democratic president. “One of my things is House majority. ROCKPAC is a build, build, build,” Pelosi said at longtime supporter of DeFazio and an Oct. 22 event hosted by CNN. NSSGA has a great working rela- “Build the infrastructure of America tionship with the new majority from sea to shining sea. Not only committee staff. An advocate of in- surface transportation but broadcreasing funding for the Highway band and water systems.” President Trump  said  in an Trust Fund, DeFazio has vowed Oct. 17 interview on Fox Business that a top priority will be making the Trust Fund solvent. “We’ve got News that “infrastructure is going to get back to being No. 1 in the to be starting after the midterms world again, and you’re going to and we think that’s going to be an

easy one.’’ With bipartisan interest in infrastructure, NSSGA will continue to build on advocacy efforts over the past two years. “An infrastructure bill is something that President Trump and lawmakers seem to agree on, and we will continue to advocate for a serious and sustainable investment in our country’s infrastructure. Fixing the funding mechanics of the Highway Trust Fund and improving our aging roads will allow goods and services to move faster and safer, create jobs and allow people to travel to work more safely. When you do all of that, our economy can grow.” said Michael W. Johnson, NSSGA president and CEO. “That is why we encourage all lawmakers to work together, because better infrastructure leads to a better America.” A Democratic majority in the House could mean additional hearings for committees with oversight of the Mine Safety and Health Administration and Environmental Protection Agency. Johnson explained that people from aggregates companies have an opportunity to educate about the importance of aggregates and the costs of overly-burdensome regulations. “In September, hundreds of people came to D.C. to show lawmakers the ways that many regulations, which are not based on common sense or sound science, delay or derail critical infrastructure improvements. We have an opportunity, as an industry, to keep making our voice heard loud and clear on Capitol Hill this year.”v Georgia Contractor