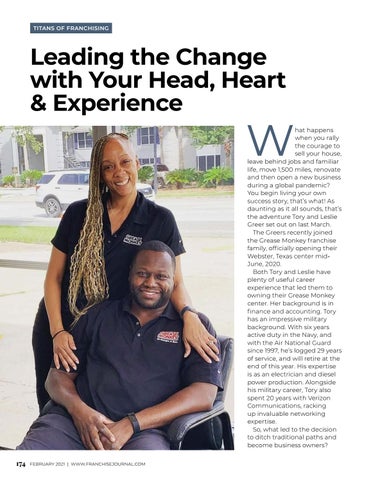 Leading the Change with Your Head, Heart & Experience

hat happens when you rally the courage to sell your house, leave behind jobs and familiar life, move 1,500 miles, renovate and then open a new business during a global pandemic? You begin living your own success story, that’s what! As daunting as it all sounds, that’s the adventure Tory and Leslie Greer set out on last March. The Greers recently joined the Grease Monkey franchise family, officially opening their Webster, Texas center midJune, 2020. Both Tory and Leslie have plenty of useful career experience that led them to owning their Grease Monkey center. Her background is in finance and accounting. Tory has an impressive military background. With six years active duty in the Navy, and with the Air National Guard since 1997, he’s logged 29 years of service, and will retire at the end of this year. His expertise is as an electrician and diesel power production. Alongside his military career, Tory also spent 20 years with Verizon Communications, racking up invaluable networking expertise. So, what led to the decision to ditch traditional paths and become business owners? Written by industry leaders and experts, Franchise Journal, helps guide both prospective and current franchise owners through the franchise...

Written by industry leaders and experts, Franchise Journal, helps guide both prospective and current franchise owners through the franchise...