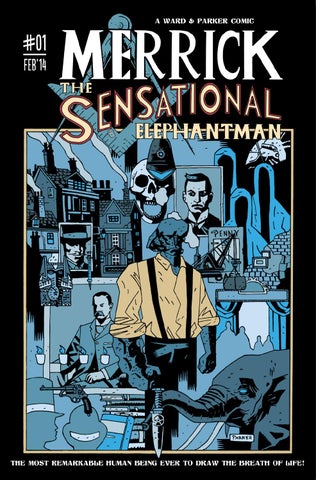 So here we are at the end of Merrick: The Sensational Elephantman #01. On behalf of myself, Luke, Nic and Clare I thank you for taking the time to check out our comic and hope you enjoyed it half as much as I enjoyed being part of its creation. Please share this issue with your friends, post the link any/everywhere and give us a shout out on Facebook and Twitter, we really do appreciate it all. I self funded this issue myself and if I were able to continue doing so I would. I have many more Merrick stories I hope to tell and a definite direction if we were ever able to turn this into an ongoing series. This is potentially only the beginning, Will Merrick have his revenge? What is Treves and his cabal upto? And what will happen to the rest of the Penny Gaff? When this issue was released a Kickstarter campaign was also launched in the hopes we could crowd fund the remaining three issues of this first story arc. If you had fun with issue #01 perhaps consider checking out the Kickstarter and together we can make something that I think will be kinda special. So thanks again. And Iâ&#x20AC;&#x2122;d like to throw an extra special thank you out there to Luke, Nic and Clare for all their hard work and to all the amazing guest artists who did a pin-up for us: Lee, Joe, Jussi, Artyom, M.S. Corley, Tiernan, Ammar, Simone and Mark. Now turn the page and take a trip back to the Penny Gaffâ&#x20AC;Ś Tom

Joseph Carey Merrick (5 August 1862 – 11 April 1890) An unblemished baby at birth, Merrick’s physical abnormalities began to manifest as he grew up in Leicester, England. After leaving home and a stint in the workhouse, Merrick found work as a ‘curiosity’. It was during this period in his life that he met Dr. Frederick Treves. Merrick tragically died of asphyxia when attempting to lie down and sleep ‘like other people’. His legacy includes a play and the 1980 David Lynch film. To this day, the precise cause of his condition remains unknown.

Sir Frederick Treves, 1st Baronet, GCVO, CH, CB (15 February 1853 â&#x20AC;&#x201C; 7 December 1923) A specialist in abdominal surgery, Treves rose from humble beginnings as the son of an upholsterer in Dorset, England to become Surgeon Extraordinary to Queen Victoria and later Honorary Serjeants Surgeon to King Edward VII. He was a writer, traveler, the president of the Society of Dorset Men, and a Knight of Grace of the Order of St John. He performed the first appendectomy in England and later saved Edward VIIâ&#x20AC;&#x2122;s life when the King was suffering from appendicitis.

Tom Norman, (7 May 1860–24 August 1930) Dubbed “The Silver King” by P.T. Barnum, the famous American showman, Tom Norman was a charismatic showman who was as famous for his patter as for his sensational exhibits. Born Thomas Noakes in Sussex, England, Norman was Joseph Merrick’s manager until the police shut down their exhibition. Vice-president of the Van Dwellers Protection Association (later the Showmen’s Guild of Great Britain) he continued a successful career as a showman and later an auctioneer of novelty shows and circuses. Joseph Merrick: The Elephant Man fucks up the occult, in a Victorian tale of gin joints, black magic and carnival freaks. https://www.fac...

Joseph Merrick: The Elephant Man fucks up the occult, in a Victorian tale of gin joints, black magic and carnival freaks. https://www.fac...