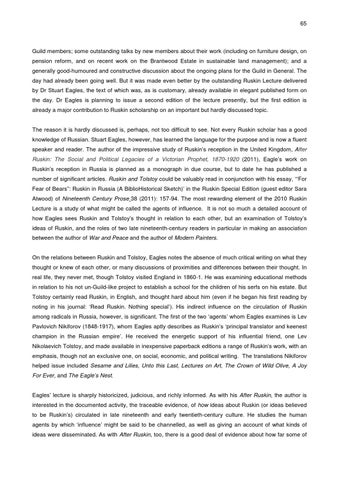 Guild members; some outstanding talks by new members about their work (including on furniture design, on pension reform, and on recent work on the Brantwood Estate in sustainable land management); and a generally good-humoured and constructive discussion about the ongoing plans for the Guild in General. The day had already been going well. But it was made even better by the outstanding Ruskin Lecture delivered by Dr Stuart Eagles, the text of which was, as is customary, already available in elegant published form on the day. Dr Eagles is planning to issue a second edition of the lecture presently, but the first edition is already a major contribution to Ruskin scholarship on an important but hardly discussed topic. The reason it is hardly discussed is, perhaps, not too difficult to see. Not every Ruskin scholar has a good knowledge of Russian. Stuart Eagles, however, has learned the language for the purpose and is now a fluent speaker and reader. The author of the impressive study of Ruskin’s reception in the United Kingdom, After Ruskin: The Social and Political Legacies of a Victorian Prophet, 1870-1920 (2011), Eagle’s work on Ruskin’s reception in Russia is planned as a monograph in due course, but to date he has published a number of significant articles. Ruskin and Tolstoy could be valuably read in conjunction with his essay, ‘“For Fear of Bears”: Ruskin in Russia (A BiblioHistorical Sketch)’ in the Ruskin Special Edition (guest editor Sara Atwood) of Nineteenth Century Prose¸38 (2011): 157-94. The most rewarding element of the 2010 Ruskin Lecture is a study of what might be called the agents of influence. It is not so much a detailed account of how Eagles sees Ruskin and Tolstoy’s thought in relation to each other, but an examination of Tolstoy’s ideas of Ruskin, and the roles of two late nineteenth-century readers in particular in making an association between the author of War and Peace and the author of Modern Painters. On the relations between Ruskin and Tolstoy, Eagles notes the absence of much critical writing on what they thought or knew of each other, or many discussions of proximities and differences between their thought. In real life, they never met, though Tolstoy visited England in 1860-1. He was examining educational methods in relation to his not un-Guild-like project to establish a school for the children of his serfs on his estate. But Tolstoy certainly read Ruskin, in English, and thought hard about him (even if he began his first reading by noting in his journal: ‘Read Ruskin. Nothing special’). His indirect influence on the circulation of Ruskin among radicals in Russia, however, is significant. The first of the two ‘agents’ whom Eagles examines is Lev Pavlovich Nikiforov (1848-1917), whom Eagles aptly describes as Ruskin’s ‘principal translator and keenest champion in the Russian empire’. He received the energetic support of his influential friend, one Lev Nikolaevich Tolstoy, and made available in inexpensive paperback editions a range of Ruskin’s work, with an emphasis, though not an exclusive one, on social, economic, and political writing. The translations Nikiforov helped issue included Sesame and Lilies, Unto this Last, Lectures on Art, The Crown of Wild Olive, A Joy For Ever, and The Eagle’s Nest. Eagles’ lecture is sharply historicized, judicious, and richly informed. As with his After Ruskin, the author is interested in the documented activity, the traceable evidence, of how ideas about Ruskin (or ideas believed to be Ruskin’s) circulated in late nineteenth and early twentieth-century culture. He studies the human agents by which ‘influence’ might be said to be channelled, as well as giving an account of what kinds of ideas were disseminated. As with After Ruskin, too, there is a good deal of evidence about how far some of

A journal dedicated to John Ruskin and the nineteenth century 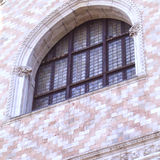