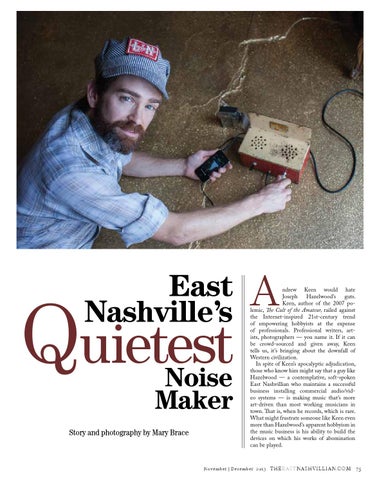 Story and photography by Mary Brace

ndrew Keen would hate Joseph Hazelwood’s guts. Keen, author of the 2007 polemic, The Cult of the Amateur, railed against the Internet-inspired 21st-century trend of empowering hobbyists at the expense of professionals. Professional writers, artists, photographers — you name it. If it can be crowd-sourced and given away, Keen tells us, it’s bringing about the downfall of Western civilization. In spite of Keen’s apocalyptic adjudication, those who know him might say that a guy like Hazelwood — a contemplative, soft-spoken East Nashvillian who maintains a successful business installing commercial audio/video systems — is making music that’s more art-driven than most working musicians in town. That is, when he records, which is rare. What might frustrate someone like Keen even more than Hazelwood’s apparent hobbyism in the music business is his ability to build the devices on which his works of abomination can be played.