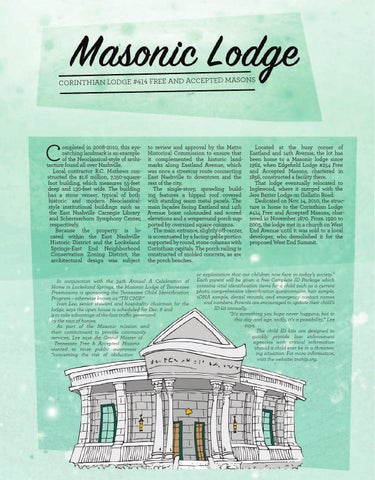 ompleted in 2008-2010, this eyecatching landmark is an example of the Neoclassical-style of architecture found all over Nashville. Local contractor R.C. Mathews constructed the $1.6 million, 7,150-squarefoot building, which measures 55-feet deep and 130-feet wide. The building has a stone veneer, typical of both historic and modern Neoclassicalstyle institutional buildings such as the East Nashville Carnegie Library and Schermerhorn Symphony Center, respectively. Because the property is located within the East Nashville Historic District and the Lockeland Springs-East End Neighborhood Conservation Zoning District, the architectural design was subject

to review and approval by the Metro Historical Commission to ensure that it complemented the historic landmarks along Eastland Avenue, which was once a streetcar route connecting East Nashville to downtown and the rest of the city. The single-story, sprawling building features a hipped roof covered with standing seam metal panels. The main façades facing Eastland and 14th Avenue boast colonnaded and scored elevations and a wraparound porch supported by oversized square columns. The main entrance, slightly off-center, is accentuated by a facing-gable portico supported by round, stone columns with Corinthian capitals. The porch railing is constructed of molded concrete, as are the porch benches.

In conjunction with the 34th Annual A Celebration of Home in Lockeland Springs, the Masonic Lodge of Tennessee Freemasons is sponsoring the Tennessee Child Identification Program – otherwise known as “TN CHIP.” Ivan Lee, senior steward and hospitality chairman for the lodge, says the open house is scheduled for Dec. 8 and 9 to take advantage of the foot traffic generated by the tour of homes. As part of the Masonic mission and their commitment to provide community services, Lee says the Grand Master of Tennessee Free & Accepted Masons wanted to raise public awareness “concerning the risk of abduction

Located at the busy corner of Eastland and 14th Avenue, the lot has been home to a Masonic lodge since 1962, when Edgefield Lodge #254 Free and Accepted Masons, chartered in 1856, constructed a facility there. That lodge eventually relocated to Inglewood, where it merged with the Jere Baxter Lodge on Gallatin Road. Dedicated on Nov. 14, 2010, the structure is home to the Corinthian Lodge #414 Free and Accepted Masons, chartered in November 1870. From 1920 to 2005, the lodge met in a church on West End Avenue until it was sold to a local developer, who demolished it for the proposed West End Summit.

or exploitation that our children now face in today’s society.” Each parent will be given a free Complete ID Package which contains vital identification items for a child such as a current photo, comprehensive identification questionnaire, hair sample, sDNA sample, dental records, and emergency contact names and numbers. Parents are encouraged to update their child’s ID kit annually. “It’s something you hope never happens, but in this day and age, sadly, it’s a possibility,” Lee says. The child ID kits are designed to quickly provide law enforcement agencies with critical information should a child ever be in a threatening situation. For more information, visit the website: tnchip.org.